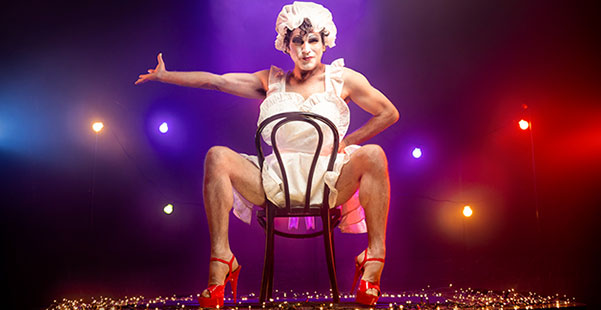 From Barangaroo Reserve and Parramatta to some of the city’s most unique spaces, Sydney Festival’s 2020 line-up sees Festival-goers of all ages exploring the city through a range of over 75 large-scale public events, exhibitions, installations and performances throughout January. The Australian Pride Network takes a look at twelve events worth checking out:

Anthem
Roslyn Packer Theatre: 15 – 19 January
Twenty-one years ago, four playwrights and a composer came together to create Who’s Afraid of the Working Class? – a powerful, critically-acclaimed portrait of Australia in the Howard era. After a series of decades where the Australian populace radically transitioned from mostly working class to mostly middle-class, Anthem casts its net wider, looking at what divides and unites us as a country in 2020, and whether we truly do “sing with one voice”. The answer, resoundingly, is no – we do not. Directed by Susie Dee, Anthem features the writings of Andrew Bovell, Patricia Cornelius, Melissa Reeves, Christos Tsiolkas and Irine Vela

Betty Blokk-Buster Reimagined
Magic Mirrors Spiegeltent: 7 – 26 January
In 1975, a saucy hausfrau with a feather duster and a bare bottom stepped onto the stage of the Balmain Bijou and changed Australian theatre forever. Betty Blokk-Buster Follies was the talk of the town. Inspired by the original staging and created with Reg Livermore’s imprimatur, this 21st century Betty Blokk-Buster invites Sydney Festival audiences into her tent show, where a live band and Betty’s coterie of reinvented has-beens, battlers, freaks and survivors are waiting to wow a new generation. Directed by Craig Ilott (Velvet, Smoke & Mirrors), Betty Blokk-Buster Reimagined stars the multi-talented Josh Quong Tart. World Premiere!

Black Ties
Sydney Town Hall: 10 – 18 January
You’re invited to the wedding reception of M?ori woman Hera and Aboriginal man Kane, two ambitious and deeply in love career-hotshots who have their perfect day flawlessly mapped out. But there’s one thing Hera and Kane can’t control…their families. As the biggest mob of Aunties, Uncles and cousins from both sides of the ‘ditch’ get worked up for the blackest wedding ever, reality sinks in fast. Will this international love story bring two strong cultures together, or will it blow Hera and Kane’s world apart? Directed by Rachael Maza and Tainui Tukiwaho, Black Ties features and an unrivaled cast including Uncle Jack Charles, Mark Coles Smith, Lisa Maza and Brady Peeti. World Premiere!

Bran Nue Dae
Riverside Theatres: 15 January – 1 February
The world’s best-loved Aboriginal stage musical, gets a major revival on its 30th birthday.Packed to the tin roof with humour and hope, and fuelled by the soul-reggae-country sounds of cult band Kuckles, the late Jimmy Chi’s musical is a road-trip through 1960s Western Australia. Follow young Willie as he hitchhikes his way home from mission school back to the girl he loves, with two hippies, a wily Uncle and a German priest for company. Staged on a recreation of the historic Sun Pictures open-air cinema in Broome, Bran Nue Dae looks back to a different world, and forward to a better tomorrow.

Colossus
Carriageworks: 16 – 19 January
Is a crowd more than the sum of its parts? To what extent is the mood of a crowd a reflection of its individuals, and how are those individuals changed by the experience of humanity en masse? These questions and more inspire Australian choreographer Stephanie Lake’s Colossus, an epic work featuring 50 dance students from Ev & Bow, NAISDA, New Zealand School of Dance and Sydney Dance Company’s Pre-Professional Year. Hypnotic and visually stunning, Lake’s symmetrically satisfying dance work sees all 50 bodies move as one. Exploring the beauty and ugliness of the collective experience, Colossus builds and re-builds towards a united, frenetic and formidable utopia.

I’m A Phoenix, Bitch
Drama Theatre – Sydney Opera House: 14 – 17 January
Bryony Kimmings’ offbeat, deeply funny and sharply heartbreaking feminist musical about the worst year of her life, when she lost her mind, her partner, her house and nearly lost her child. Never one to shy away from big, scary topics, Kimmings’ processes her postnatal depression and the collapse of her personal life through the medium of witty and wacky songs, horror movie shtick, cleverly detailed set design and epic film projections.

Joan Didion’s The White Album
Roslyn Packer Theatre: continues to 12 January
Institutional racism, disaffected youth, an anxiety-ridden populace and a puffed-up, over-privileged celebrity dominating American politics – sound familiar? First published in 1979, Joan Didion’s landmark work of New Journalism The White Album was “an extraordinary report on the aftermath of the 1960s in America… brilliantly interweav[ing] her own ‘bad dreams’ with those of a nation confronting the dark underside of 1960s counterculture. Lars Jan’s new staging expands Didion’s piercing and jaundiced observations of her world and her own mind into a brilliantly theatrical phantasmagoria of voices, attitudes, dreams and nightmares.

Lady Tabouli
Riverside Theatres: 11 – 18 January
James Elazzi‘s piercing and deliciously funny-until-it’s-not play is an unflinching examination of culture clash in contemporary Australia, and a searing look at how expectations can eat away at individuals – until they decide to change the rules. Lebanese-Australian Danny yearns to live his best life, but acceptance seems impossible from his conservative family. It’s the day of his nephew’s baptism and Danny is godfather. Living back home with his religious Lebanese mother, he’s thrown into the maelstrom of preparations and high emotions. Where do you turn when the people you love refuse to accept the truth? Award-winning director Dino Dimitriadis directs Lady Tabouli for True West – a season of independent theatre celebrating voices and stories from Sydney’s west.

Proclamation
Barangaroo Reserve: continues to 26 January
What does the idea of a flag mean to you? How does flying a flag make you feel connected to your homeland? And what images or icons truly signify the way you feel about your connection to Australia as land and home? Proclamation is a large-scale art installation at Barangaroo Reserve, flying 250 flags that explore Australians’ diverse ideas about land and country, belonging and possession. Free event!

Reko Rennie: REMEMBER ME
Carriageworks: January 2020 – January 2021
A monumental illuminated text work by Melbourne-based Kamilaroi artist Reko Rennie, REMEMBER ME references his history as a graffiti artist, whose adaption of urban spaces created sites of protest, politics and poetry. 2020 marks the 250th anniversary of Captain James Cook’s first landfall at Botany Bay and the HMB Endeavour’s charting of the east coast of Australia. In a national climate currently marred by tension and division as to how this history is acknowledged, Rennie’s work is a searing reminder of the frontier wars, the massacres and the survival of the real sovereigns of this country, the Aboriginal people of Australia. Free event!

The 2020 Sydney Festival continues to 26 January. For more information and full program, visit: www.sydneyfestival.org.au for details.