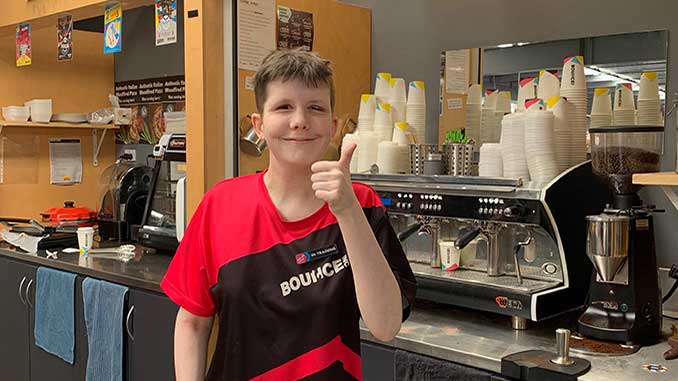 Only four years ago, it was a challenge for Brett Hall to get out of bed, let alone leave his home. The then 16-year-old had trouble making friends, lacked the confidence to go out in his community, and was often anxious, lonely and isolated.

Brett was living with a new diagnosis of autism spectrum disorder (ASD) and significant anxiety due to gender dysphoria – the distress caused by a mismatch between his biological sex and his gender identity.

“I was often lonely, I didn’t have any friends, it was very hard for me at school, I was dealing with a lot with gender dysphoria,” said Brett, 20, a trans man of Kingswood, South Australia.

But today, thanks to his own determination, his caring family and a range of supports funded through the National Disability Insurance Scheme (NDIS), Brett has a new circle of friends, is out and about in his community, and is feeling more positive about his identity, his life and his future.

“The NDIS has been really good for me, it’s put me in touch with programs and people who have helped expand my social skills and confidence in myself,” he said.

Brett says he wants to share his story for Wear it Purple Day to help raise awareness of the challenges faced by people like himself.

“I think it’s obviously important to raise awareness but also it gives people who are affected by it a chance to speak up and be able and go ‘OK, this is me, I’m like this person’,” he said.

Brett has a message for other young trans and gender diverse people. “I would probably say, you’ve got all the time in the world, you can learn to love yourself, just be yourself,” he said.

Brett is now a proud member of the LGBTIQA+ community, enjoys socialising and sometimes going out for coffee, and is busy learning new life skills.

Twice a week he attends NDIS provider Autism SA’s Next Step program, funded through the NDIS School Leaver Employment Support (SLES) program, which helps him to build social, life and pre-employment skills through a range of workshops and confidence-building activities.

In recent months, Brett has gained enough confidence to travel independently to attend the program. He now hopes to start a university foundational studies course next year.

“I’ve made friends with people with similar interests through the Autism SA Next Step program and I feel like I’m able to connect with them better than with someone who is neuro-typical.”

“I’m a lot more confident and a lot less lonely than I used to be, though I do still have my down days. Gender dysphoria doesn’t disappear forever so I think we can expect those days every so often, but I’m not as affected by it as I once was and I’m looking forward to starting Uni next year,” said Brett.

Brett and his father Jason Hall believe a key part to Brett’s newfound confidence has been the support of people who have their own lived experience of gender diversity.

Through his NDIS plan, Brett has support workers from within the LGBTIQA+ community, who have helped guide and mentor him on his trans journey.

“When Brett first began to transition, his thought was he had to do it very quickly, so he thought he had to make the change in months, and I think that was also contributing to some of his ASD symptoms,” said Jason.

“But with help from the support workers, Brett has a better idea of the timing of things, and that there’s no rush in life, and the transition process can take years or even decades. And the key is to accept yourself in any one of those stages and love yourself for who you are.”

“The NDIS workers have really helped him to understand that process and it’s been really helpful for the whole family, including my parents who are older, to understand what he has been going through, which has also helped Brett,” said Jason.

Brett’s support worker Rachel Lafain, a social worker, says she has seen a massive transformation in Brett’s confidence over the past four years.

“Particularly since he’s been able to present in a way that’s affirming for him as a young man, that has certainly helped his confidence, you can see he’s a lot prouder of who he is now that he can look and live the way he’s always wanted to,” she said.

Brett says Rachel helped him feel more included by introducing him to the LGBTIQA+ community. “I just feel a really big sense of belonging whenever I’m around that community because even though we may not have interests in common, we still have that big overarching thing that connects us,” he said.

Brett’s other NDIS support worker is a transman with new Adelaide disability service provider Colourful Abilities, which supports members of the LGBTIQA+ community living with disability.

“Being able to have people there for me who have had some of those experiences and having that good support system has been really good for me,” said Brett.

He says he believes Brett would not be in the positive place he is today without NDIS support, which also includes funding for a psychologist, physical therapy, and hydrotherapy.

“There is no way I could afford the support that Brett needs on my own, it just wouldn’t be possible,” he said.

The NDIA is committed to ensuring that lesbian, gay, bisexual, transgender, intersex, queer, and asexual (LGBTIQA+) people with disability have an equal and equitable chance to benefit from the NDIS.

The NDIA LGBTIQA+ Strategy outlines our commitment to being respectful and responsive to the diverse needs of people with disability who identify as LGBTIQA+, their families, carers and communities.