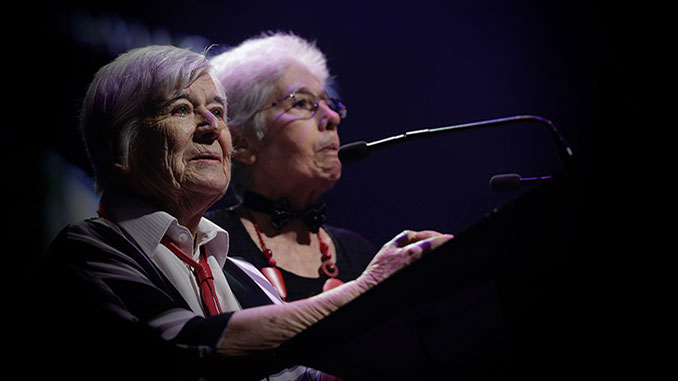 Introducing us to Francesca Curtis and Phyllis Papps, the first lesbian couple to come out on national television almost fifty years ago, the powerful and inspiring documentary Why Did She Have To Tell The World? was recently screened as part of this year’s MQFF and on ABC TV Plus + iview.

Francesca Curtis and Phyllis Papps are many things. Researchers. Writers. Ultra-Feminists. Partners. When they appeared on ABC TV’s This Day Tonight’s interview about lesbianism in October 1970, their lives were changed forever.

Although against their families’ wishes and society norms, the women began their love story publicly whilst up against a widespread national mentality of homophobia. Unpredictably, Phyllis and Francesca became the public face of change, becoming members of Australia’s first gay political rights group, the Daughters of Bilitis, now known as the Australasian Lesbian Movement.

With their story spanning decades and a new LGBTQIA+ generation emerging, the couple uncover their contribution to one of the biggest shifts in Australian history, and also open up about the importance of acceptance in their lives. Refusing to become invisible, Phyllis and Francesca come out for the final time against the backdrop of marriage equality, and a renewed sense of hope for the future.

“When I set out to create the film, my main goal was to hold up a mirror to Phyllis and Francesca’s national coming out fifty years ago,” said the film’s writer/director Abbie Pobjoy. “To showcase their hardships, triumphs and activism that helped push one of the first major social shifts in Australian history and our hopeful future as a community.”

“Now in the completion of the project, I realised that this story has also held up a mirror to myself, my fellow storytellers and the next generation of LGBTQIA+ young people and where we have to go next to secure our acceptance and livelihoods.”

Abbie Pobjoy, also known as AP, is a writer, director and documentary maker from Melbourne, Australia. With a strong sense to unleash the female and queer experience on screen, Abbie’s work focusses on outnumbered perspectives and the integration of the past and the present.

Their work has been recognised by The Age, Stronger Than Fiction and Global Citizen and was recently nominated for BBFF’s ‘Young Australian Filmmaker of the Year.’ With a passion for queer stories, Abbie has recently spoken for First Mardi Gras Inc’s annual 78ers forum Fifty Years of Visibility, is a part of the directory for Safe Space Alliance and recently took home the Step Up Award from the Melbourne Queer Film Festival.

This has led them to write and direct, Why Did She Have To Tell The World? in association with Screen Australia, Film Victoria and the ABC. Abbie also currently works as a part of the team at The Post Lounge and inside the development team at Orange Entertainment Co. They were most recently the Script Coordinator for the new ABC Comedy Show Retrograde, written by Meg O’Connell and Anna Barnes, which all took place inside an online bar.

“We’re delighted to start the new Compass season with this powerful and uplifting story, which has its origins in a slice of ABC history,” said Jessica Douglas-Henry, series producer of ABC Compass.

Why Did She Have To Tell The World? is written and directed by Abbie Pobjoy, produced by Bonny Scott, edited by Tayler Martin and executive produced by Sue Maslin and Diana Fisk. Executive Producer for the ABC: Jessica Douglas-Henry.

Why Did She Have To Tell The World? will screen in an encore Screening on ABC TV on Sunday 21 March at 6:30pm. For more information, visit: www.whydidshe.com.au for details. Take a sneak peak at the trailer here!

Image: Francesca Curtis and Phyllis Papps in Why Did She Have To Tell The World? (film still)