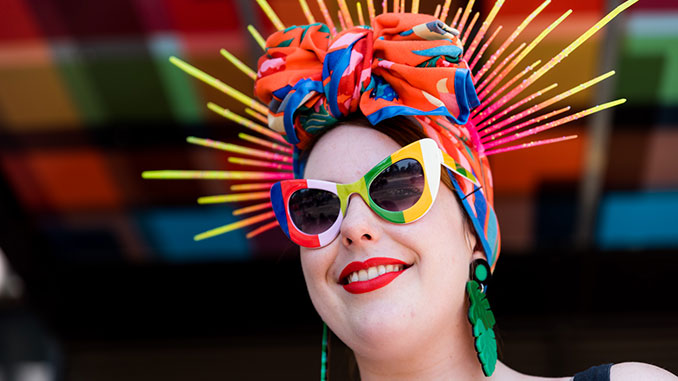 50 Years: Queers & Pioneers
Cracked Actors Theatre (CAT): 5 & 6 February (online)
2023 will mark 50 years since PM John Gorton put forward a motion in Canberra that “in the opinion of this House homosexual acts… should not be subject to the criminal law” – 50 Years: Queers & Pioneers will showcase artists who will present their work for the chance to be selected for a fully produced season at CAT for Midsumma Festival 2023 to celebrate this milestone!

And She Would Stand Like This
Stables – Meat Market: 3 – 12 February
Presented by Antipodes Theatre Company, Greek tragedy meets Harlem ball culture in this fierce and fabulous new play, adapted from Euripides’ The Trojan Women and inspired by the seminal documentary Paris is Burning. Set in a hospital waiting room during a mysterious plague, the play is a modern observation of HIV/AIDS and reimagines the Greek characters as Queer bodies of colour fighting for survival.

An Intimate Evening with Granny Bingo
Comedy Republic: 27 & 30 January
These darling old dames of the comedy scene have been titillating audiences for decades at their hilarious bingo night, and now they’re going to bare all in this intimate evening, reflecting on their many years on this planet. After a sold out season at the Melbourne International Comedy Festival, Edith Vale (Thomas Jaspers) and Maureen McGillicuddy (Kyle Minall) are back for two nights only with their hilarious show An Intimate Evening With Granny Bingo.

Bottom
Bluestone Church Arts Space: 1 – 5 February
Locked in his bathroom during a tragic third date, Willy asks: are you a Top or a Bottom? Join Willy for a queer coming-of-age remix, as he questions if ‘bottom’ in the bedroom means ‘bottom’ in life – and whether Beyoncé can help put his love on top. This is for anyone who hates making the first move. Anyone who thinks they are unlovable. Anyone that’s ever tried to be someone they’re not. Bottom will also be presented at The Butterfly Club: 7 – 12 February.

BROAD
Gasworks Arts Park: 27 – 29 January
Agnes Moorehead. Rhonda Burchmore. Vivienne Westwood with a tit out. There is something heady about those brassy broads we grew up admiring. So many (b)older women, so many (A)FAB icons to look up to. So what happens when these camp inspo glamour heroines feel a bit close to your own sagging jawline? Well, you get to write your own ridiculous story and paint your own ridiculous face in a cabaret about how anyone can find their Endora – bejeweled kaftan and all – and take on the world. Multi-award-winning rock cabaret artist Geraldine Quinn returns to Midsumma Festival with her first original show in four long years – BROAD. Growing up idolising fabulous, bold, brassy (mostly ginger) older women – now she’s becoming one. So Quinn makes her overdue return to the cabaret stage to release everyone’s inner DGAF Dame.

Dioramas
Ross Watson Gallery: 22 January – 6 February
Watson’s new series, Dioramas, demonstrates an exciting development in the artist’s work, and explores personal themes relevant to his experience of the global pandemic and lock downs. A starting point was offered by the experience and the artist began imagining creating painted theatre sets or glass showcases which may be be viewed by an audience – many of which we are observing online in numerous countries as international travel remains restricted. Artworks from Watson’s 1992 Self Series also feature, which coincides with his artwork included in the upcoming NGV QUEER exhibition.

Melbourne Pride
Gertrude Street Precinct: Sunday 13 February
To commemorate the 40th anniversary of the decriminalisation of homosexuality in Victoria. Midsumma acknowledge the courage and resilience of our LGBTQIA+ community. Melbourne Pride will celebrate with live performances, music, circus, interactive activities, community stalls and demonstrations. In a contemporary exploration of festivities, we will embark on a journey of equality through inspirational arts, community involvement, food, and culture. This iconic event will feature live performances from Deborah Cheetham, KYVA, Alice Ivy, Vetta Borne, YUMMY, All The Queens Men, Kira Puru, Jawbreakers, Reuben Kaye and Electric Fields.

Run
Bluestone Church Arts Space: 1 – 5 February
Yonni is a seventeen-year-old gay Jewish kid. His devoutly religious family is preparing for the weekly shabbat, but he can think only about his schoolmate, Adam, with whom he is infatuated. As the evening’s events unfold – some of them real, some of them imagined – a deeply personal story about first love and infatuation expands to interrogate the difficult intersection of religion and queerness. Encompassing a world beyond space and time, Stephen Laughton’s Run explores what it means to love, to lose, to rebel and how to grieve. Run will also be presented at Gasworks Arts Park: 8 – 12 February.

SLUTNIK™
Theatre Works: 1 – 4 February
Part lip-sync, part fighting montage, part open mic night… SLUTNIK™ is a queer glitter-bomb of an event detailing the final fortnight on Earth of the International Fleet of Lesbian Space Cannibals. We’re just about to lift-off, and motherboard has initiated very important and very gay training for the lesbians on board before their intergalactic travels. They’ve not given away their lift-off location… but rumour has it that wherever they are, they’re living on the flesh of selected political officials. Directed by Tansy Gorman, SLUTNIK™ by Flick is a love letter to queer relationships and friendships.

The Shy Manifesto
Bluestone Church Arts Space: 1 – 5 February
Seventeen-year-old Callum is proud to be shy and he thinks you should be too – because what this noisy, crazy world needs right now is a bit more self-restraint. Tonight he is to address an audience of radical shy comrades and incite the meek to finally rise up and inherit the earth. But memories of the previous night’s drunken escapades at a classmate’s end-of-term party keep intruding, and threaten to upend the fragile identity he has so carefully created for himself. Jake Matricardi stars in this bittersweet coming-of-age comedy/drama about a shy boy who is fed up of constantly being told to come out of his shell.