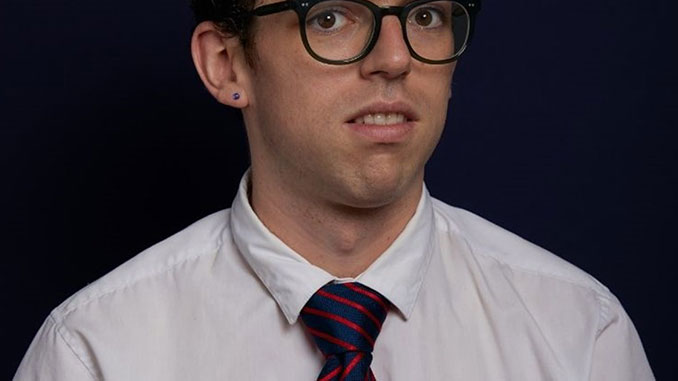 Gavin Roach presents the Australian premiere of The Shy Manifesto by Michael Ross at the Blustone Church Arts Space from 1 February as part of the 2022 Midsumma Festival.

Seventeen-year-old Callum is proud to be shy and he thinks you should be too – because what this noisy, crazy world needs right now is a bit more self-restraint.

Tonight he is to address an audience of radical shy comrades and incite the meek to finally rise up and inherit the earth.

But memories of the previous night’s drunken escapades at a classmate’s end-of-term party keep intruding, and threaten to upend the fragile identity he has so carefully created for himself.

Callum delivers his manifesto, exploring adolescence, isolation, self-loathing and sexuality. His irreverent lightness of touch, and multi- rolling as the other characters in his story endear him to the audience, encouraging us that we, too, can be proud to be shy.

The Shy Manifesto is a bittersweet coming-of-age comedy/drama about a shy boy who is fed up of constantly being told to come out of his shell.

Michael Ross is a British playwright, A graduate of the Royal Court’s Young Writers Programme, he was shortlisted for the 2014 Off West End.com ‘Adopt A Playwright’ Award.

In 2012 Michael was one of four playwrights chosen by the Writers Guild & RADA as part of their ‘Plays of Innocence and Experience’ development project, and in 2013 his play Saving Souls In Soho was selected to open ‘The Band Plays On’ festival of new writing at Greenwich Theatre.

Michael’s plays have been performed at the Arcola, the Southwark Playhouse, Theatre 503, RADA, Riverside Studios, the Kings Head, the Old Red Lion and the Old Vic Tunnels, amongst many others.

A Handful of Mustard Seed received a rehearsed reading at the Bush Theatre Library in 2010 with Paula Wilcox in the lead role, and his debut short film Dawn Rescue premiered at the 2012 Portobello Film Festival.

“In its strongest moments, the play does well to articulate the real pain of being a teenager.” – Exeunt Magazine