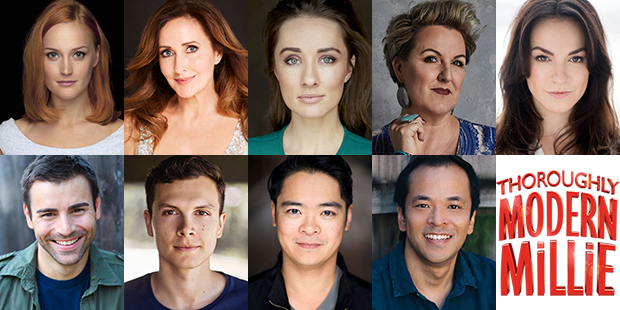 The Production Company has announced the full cast of the Broadway smash Thoroughly Modern Millie which will play the State Theatre – Arts Centre Melbourne for a strictly limited season from 3 August 2019.

It’s the height of the jazz age, and small-town girl Millie Dillmount has just arrived in New York City, ready to make her dreams come true. Millie’s plan is to marry for wealth, rather than love. But when she checks in to the Hotel Priscilla run by a very suspicious landlady (Mrs Meers), it doesn’t take long for her “thoroughly modern” plan to go awry.

Millie is a fond look at the New York of the 1920’s through a young girl’s eyes, and a nod to the musical comedies of the era. Millie has everything for a fun night out with larger than life characters plus tap dancing to knock your socks off.

The winner of six Tony Awards (including Best Musical) and five Drama Desk Awards Thoroughly Modern Millie is based on the 1967 Academy Award-winning film. It was Broadway’s most awarded new show in 2002. With a book by Richard Morris and Dick Scanlan, new music by Jeanine Tesori and new lyrics by Dick Scanlan, the score includes Not For The Life of Me, Thoroughly Modern Millie, Forget About the Boy and Gimme Gimme.

“This six time Tony Award winning musical is family entertainment at its best,” said Ken Mackenzie-Forbes AM. “Melbourne is going to love Millie with her exhilarating tap dancing, hilarious comedy, romance to melt your heart and great show stopping tunes. With Marina Prior delivering a knockout comedic star turn as the villainous landlady Mrs Meers this is not to be missed!