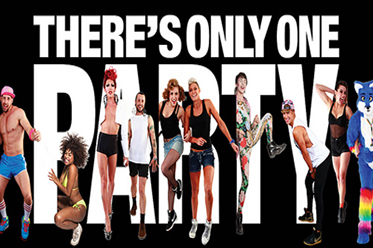 The colours are getting brighter, the barrels of glitter are getting fuller and the anticipation is only getting hotter for the annual Sydney Gay & Lesbian Mardi Gras Party, which keeps the night alive following the world’s biggest, and most iconic, night-time parade on Saturday 1 March 2014.

Two massive international DJs and a potpourri of our hottest local talent have been added to the line-up, proving the 2014 Mardi Gras Party will be one for the record books. Bigger, brighter and more glam than ever before…

Joining the fabulous New York DJ Kim Ann Foxman, up-and-coming Australian DJ Dan Slater and Yo! M.A.F.I.A., already announced, will be one of the world’s best known and widely regarded DJs: the one and only Derrick Carter.

Hailing from Chicago, Derrick is an undisputed legend of house music, though his sets traverse the definition of genre, incorporating everything from old-school disco to soul and jazz, promising a kaleidoscope of flavours that will lead everyone onto the dancefloor.

With an onslaught of his own seminal tracks at his disposal, and a world of classic music at his fingertips, Derrick will ensure no booty is left unshaken at the year’s most anticipated party.

Also announced is French DJ Leomeo, one of the world’s most sought-after DJs. Mixing tribal, progressive and tech with just about anything else he can pull out of his… headphones… Leomeo’s distinctive idiosyncratic style makes him a true innovator, and he’s guaranteed to have all the colours of the rainbow covered and leave everyone wanting more, as he has at events all over the world.

On the announcement of these two iconic DJs to add their unique flair to proceedings, Creative Consultant, Gary Leeson says, “We are so excited to have such an amazing roster of Australian and international DJs for the 2014 Mardi Gras Party. Derrick Carter is one of the original house music innovators, and we can’t wait to see what’s in his record bag for his first ever Mardi Gras set.”

“We’re also thrilled to welcome Leomeo, who has been ripping up dancefloors around the globe over the last few years with his distinctive style blending progressive, tribal, tech and house influences. No matter what your musical taste, this is going to be a Party to remember!” says Leeson

But that’s not all! These two scrumptious international additions to the lineup are complemented by some of Australia’s hottest talents. Based out of Sydney, the US Billboard Charting Producer/Remixer – and past Mardi Gras favourite – Adam Love will ensure all hearts are fluttering while he pumps out anthems and brings the show that’s seen him booked alongside Lady Gaga, Nervo, Sophie Ellis-Bextor and many, many more.

Also returning to Mardi Gras to showcase his passion for quality house music is DJ Alex Taylor, a man who has been at the forefront of the Australian dance scene for over a decade. This passion also shared by Dan Murphy, who will be joining the Party this March with his uplifting vocal house.

A regular DJ at the Colombian, Up Dayclub and Stonewall, Dom De Sousa is another Mardi Gras favourite who will keep everyone dancing into the wee hours of the morning.

Then there’s Kam Shafaati, voted Best Bear Performer 2012, our First Lady of House Kate Monroe, our very own sparkling diva Kitty Glitter, acclaimed DJ and percussionist Shalyn Gray and, with a leather-clad boot firmly planted on either side of the barbed-wire fence of contemporary pop culture, Sveta.

Since the event’s first announcement last month, tickets have been flying out the door as Mardi Gras revellers get ready to dance the night away at one of the year’s wildest, sexiest and anticipated parties of the year.

Any other party might stop there, but there are still many more fabulous additions to come in the weeks and months ahead. But Mardi Gras revellers are warned not to delay their ticket purchases! There is only a limited allocation of tickets available at the first release price!

For more information and to purchase tickets, visit: www.theparty.org.au for details.