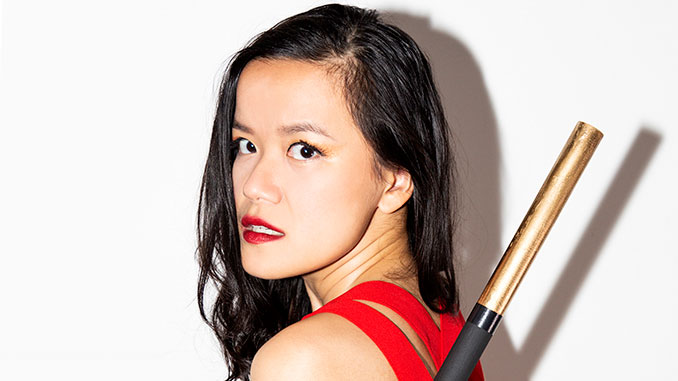 Re-imagining two characters from a towering story of Lui’s childhood – the young prince Siddhartha, and the magical Monkey from Journey to the West aka Monkey Magic – as young women in contemporary Australia, ENLIGHTENMENT is part queer romantic comedy, part crime saga and part cosmic fever dream.

The performance also features illustrations by renowned artist and activist Badiucao, who is one of the most popular and prolific political artists from China, confronting a variety of social and political issues head on in his work.

He got a nickname as China’s Banksy for keeping his identity secret since the beginning of his art career and using his art to challenge the censorship and dictatorship in China via his Twitter account @badiucao. His work has been featured by Amnesty International, Freedom House, BBC, CNN and China Digital Times, and exhibited in Australia, America and Italy.

In 2019, his first international solo exhibition in Hong Kong was cancelled due to the threat from the Chinese Government when three days before the opening of the exhibition, the artist’s identity was compromised. Authorities in China found Badiucao’s family and threatened him via them in order to cancel the show.

When the show was cancelled, Badiucao also went completely silent for seven months before coming back to the public on the 30th anniversary of Tiananmen Massacre with his documentary, which revealed his identity, China’s Artful Dissident. He is now being pursued by China and remains in exile in Australia.

Writer Joe Paradise Lui is a prolific artist, winner of the 2013 Spirit of the Fringe Fringeworld award. He is a founding member of Renegade Productions and within its aegis, he creates, writes, directs, designs and composes theatre and performance works. Their most recent work was Death Throes, created as part of the 2019 Blue Room season.

Joe Lui is also a part of the main stage and independent theatre industry in Perth as a director, writer, and a sound and lighting designer. His most recent directing work was Unsung Heroes, which was presented online as part of Black Swan State Theatre Company’s 2020 season. His most recent design work was The Sum of Us by Yirra Yaakin Theatre Company as part of Perth Festival.

Elbow Room are a Melbourne-based theatre company committed to the development of the craft of writing and performance making. Renowned for their intellectual and artistic integrity, they have presented works with Melbourne Theatre Company, Southbank Corporation (Brisbane), Regional Arts Victoria, Summerhall UK (Scotland), Brisbane Powerhouse, Brisbane Festival, the Melbourne, Adelaide and Sydney Fringe Festivals and HotHouse Theatre to name a few.