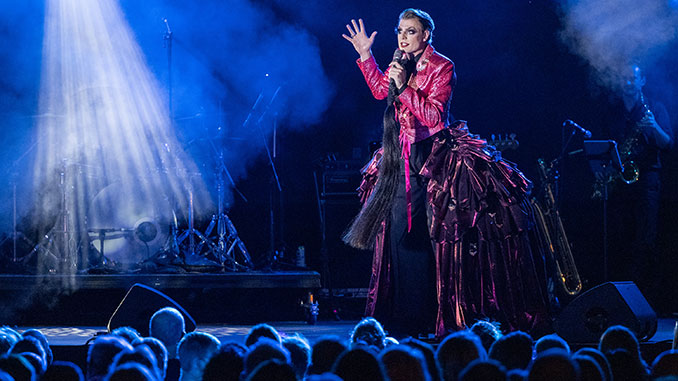 A lot of planning goes into a festival. Especially now in COVID times, where you have to expect the unexpected and try and plan for it. Most festivals over the past 18 months have been postponed, rescheduled, cut short, scaled back or just cancelled altogether.

So to complete 14 fun-filled nights of events is quite the achievement. And that’s what Darwin Festival has done, wrapping a successful program of Hot August Nights on Sunday 22 August. But what a wild ride it was!

“We’re so incredibly proud of what we’ve been able to deliver these last few weeks, against all the odds,” said Darwin Festival CEO James Gough. “When you’re staging a major event during a pandemic you have to have a whole alphabet of back up plans. But I don’t think any of us could have predicted just how many of those plans we’d go through – literally all of them!”

Gough is not exaggerating. Over the last two months, rolling COVID outbreaks across the country have continued to wreak havoc, with almost every state going into lockdown at some point. Some more than once.

And when it comes to lockdowns, one thing is certain – border closures. In the immediate lead up to and during the Festival, there were at least eight changes to the Northern Territory’s border restrictions, which affected staff, artists and supply chain not to mention visitors to the NT, all trying to make it to the Top End.

Some simply couldn’t come. Others flew, only to turn around when they arrived after restrictions had changed while they were in the air. Eighteen companies and staff were prepared to quarantine in Howard Springs for two weeks for the chance to be part of the Festival.

All in all, these border closures meant 78 changes to performances over the Festival’s run with nine new shows programmed, five additional performances added, eight postponed, 17 rescheduled and 39 cancelled.

“Like trying to wrestle wind” is how Darwin Festival Artistic Director Felix Preval describes what it felt like to deliver a major arts festival during Australia’s worst COVID-19 outbreak.

The printed program guide released in June bears only a passing resemblance to the final Festival line-up, as shows were rescheduled, then cancelled, then the new shows added also had to cancel!

“Every day bought something new.” Felix Preval explains. “We had so many program scenarios happening and every day we were on the phones to artists and managers in different states looking for shows that would be suitable replacements.”

“It was the ultimate example of ‘the show must go on’, but we also had to keep the integrity of the program and deliver a Festival we would be proud of (and audiences would love),” said Preval.

And love it audiences did, with the reception nothing short of amazing. Over 30,000 tickets to Festival shows were sold, with 84 performances sold out and more than 35,000 people attending Festival Park.

These numbers are especially incredible when you add in the icing on the curveball cake thrown by a snap 72-hour lockdown for Darwin at the start of the Festival’s final week.

The program may have been a moving feast, but it was a delectable one. Big and bold from the outset it included the major commission, The Pulse, which completely wowed audiences at Darwin Entertainment Centre.

Intimate theatre, cabaret and comedy experiences at Brown’s Mart and Happy Yess got people talking, and cabaret was king (or should that be queen) wowing huge crowds at the INPEX Sunset Stage across a diverse range of artists and performances – all of which were amazingly entertaining.

Free and family fun could be found all over town – in galleries, at Casuarina Square, at the Esplanade and Darwin Waterfront, where Justine Clarke had youngsters dancing in their seats on the Festivals final day! 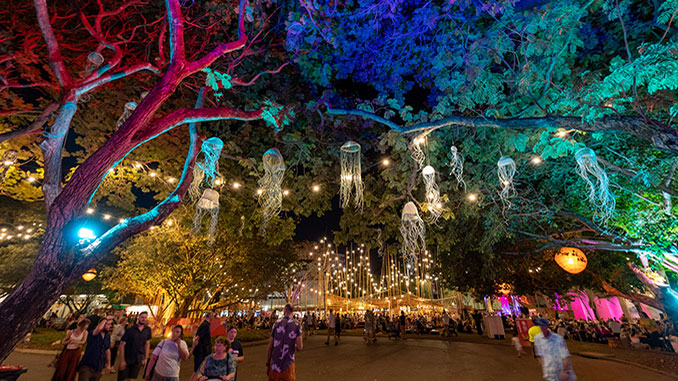 Festival Park was the vibrant hub of the action, with tasty treats  on offer and free entertainment all enjoyed under the dazzling lights and exquisite jellyfish created by Aly de Groot that dangled from the trees.

For every show that didn’t happen, something else just as brilliant was offered in its place, and audiences were ecstatic at the chance to experience a festival.

“There were occasions where we announced a brand-new show on the day of the performance, and by evening it would close to sold out” said Preval. “We’re so lucky to have such supportive and engaged audiences here in Darwin. They put a lot of trust in us that we’ll be able to deliver something they’ll love.”

“That feeling has kept us pushing through, even when it felt impossible. Like when the Greater Darwin region went into lockdown at the start of our last week. It seemed like COVID had finally beaten us,” said Preval.

Thankfully, the lockdown was swift and successful and with no evidence of COVID in the community the Festival was able to restart with full support from the Northern Territory Government Department of Health, albeit with greater restrictions in place.

Gough guided the team, measuring risk against strategic vision while at the same time overseeing the Festival’s rigorous COVID management plan to ensure a safe environment for all.

“We had successfully staged a homegrown Festival in 2020, and that taught us a lot. We already had a super detailed COVID safety plan in action, so when new restrictions were added after the lockdown, it was easy for our team to pivot and successfully apply these new guidelines,” said Gough.

“New restrictions weren’t the ideal way to close the Festival. But it was just another card in a long list of things we’d been dealt, and it certainly wasn’t going to bring audiences down.”

“Everyone was just incredibly grateful and excited they could get together at all, given what’s happening around the country. The vibe in our Festival hub, Festival Park remained electric ‘til the end,” said Gough.

For Preval, there’s a sense of pride in the way artists and the sector sector rallied together in the face of difficulties. “The arts community has been hit incredibly hard by COVID. We’re just so thankful for the flexibility and perseverance of every artist in the program,” he said.

“It was heartbreaking to have to cancel so many shows, but those that did get to perform proved daily the important role that the arts play in bringing people together and offering audiences moments of joy and reflection.”

“Our arts community in Australia is resilient, and it doesn’t get the acknowledgment and support that it deserves. Presenting a major festival has always been challenging, but now it feels close to impossible.”

“Looking to the future, it feels imperative that a federally funded insurance scheme be established to help underpin the enormous financial risks involved. Otherwise, it’s hard to imagine how live performance and festivals, in particular, can continue in this environment,” said Preval.

Reflecting on the Festival, Gough said a sincere thank you was due to the many committed people who worked to make this year possible. “We had such an incredible team who went above and beyond to deliver the Festival,” he said.

“We had 105 staff, 92 volunteers, over 450 artists and countless suppliers who worked day and night to make sure Darwin got a vibrant and exciting Festival. I can’t thank them enough for all they’ve helped us achieve.”

“And a special thank you to our partners too. Thank you for supporting us and for trusting us to deliver an event that Darwin could be proud of,” said Gough.

As the Festival looks ahead to August 2022, it has high hopes of delivering its much-anticipated major commission work Bungul, along with a stellar line-up of interstate artists that couldn’t make Darwin Festival’s stages this year.

Where the wonderful world of festivals will be in a years’ time no one knows, but one thing is for sure, community spirit and resilience live on at Darwin Festival, and that gives us all hope.

The 2022 Darwin Festival will return from 4 – 21 August. For more information, visit: www.darwinfestival.org.au for details.