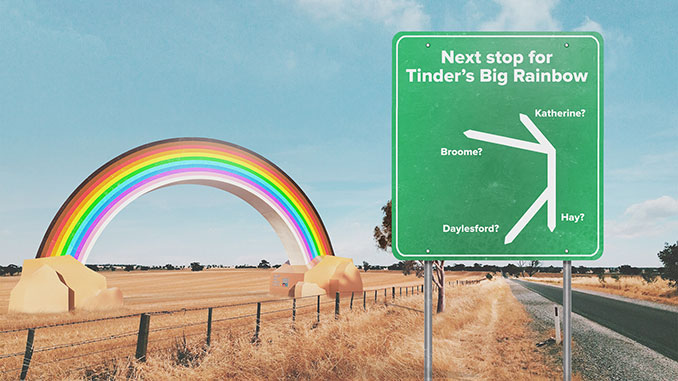 Australia’s first “Big” landmark dedicated to regional LGBTQIA+, the Big Rainbow, is one step closer to finding its new regional home, with a shortlist of four towns revealed on the Big Rainbow Project website and open to a public vote over the next month.

The landmark builds on Tinder’s continued commitment to the LGBTQIA+ community in Australia. During the initial public submission period, which launched during Sydney’s Mardi Gras events and ran until 20 April, Tinder received thousands of submissions from every corner of the country.

The selection of the final four towns has been made in collaboration with the project’s consultation panel of community advisors and experts from the LGBTQIA+ and First Nations communities. The final regional towns open for the public vote until 30 June are:

It’s now up to Australia to weigh in on which of these four finalists is the preferred home of Australia’s largest symbol of pride and solidarity with the nation’s LGBTQIA+ community. Regional towns across the country have already been campaigning hard to bring the Big Rainbow to them and it’s time for the rest of the nation to join them.

“We’ve been blown away by the level of support for the Big Rainbow from every corner of the country,” said Tinder Australia Country Director, Kristen Hardeman. “The Big Rainbow Project is a long-term commitment for us, a deepening of our support to the Australian LGBTQIA+ community beyond the urban centres.”

“We encourage each and every Australian to make their voice heard on the preferred home for the Big Rainbow in regional Australia where it can be a beacon for diversity, inclusion and self-expression,” said Hardeman.

The Big Rainbow Project is an ongoing initiative from Tinder aimed at closing some of the connection gaps faced by regional queer communities compared to their metropolitan counterparts.

In addition to the Big Rainbow landmark, a larger-than-life symbol of equality and unity, Tinder has earmarked $100,000 to be donated to regional community organisations to support programmes for the regional LGBTQIA+ community.

“We’re pleased to have worked with Tinder to help shape the ways in which the Big Rainbow Project can have a direct impact on the lives of queer people across Australia,” said Queer Agency Co-Director, Brooke Brady.

“It’s encouraging to see that so many Australians are passionate about supporting the queer community and we hope that everyone who submitted a regional town votes again to help find the Big Rainbow a loving, regional home,” said Brady.

Votes for the Big Rainbow’s regional home are welcome from 1 – 30 June 2022. For more information and to vote, visit: www.bigrainbowproject.com.au for details.