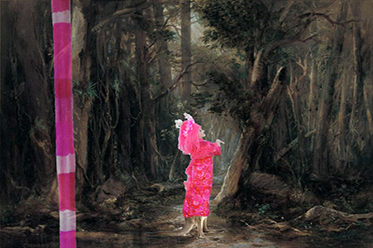 The sexual and gender diversity of Aboriginal peoples remains mostly absent in the recordings and interpretations of histories, and these absences reinforce a heterocentric reading of Aboriginal culture.

It is not inconceivable that homophobia and transphobia are practices introduced by the Christian missionaries. The social order of the missions, in an attempt to “civilize the natives”, limited Aboriginal expression. Anthropological research, most notably from the colonial settings of the early 20th-century, was evidently not interested in our sexual and gender diversity either.

Perhaps this is linked to the discipline’s quest for “pure” cultures uninterrupted by European contact, including sexual behaviour that was being viewed (or rather explained away or “unseen”) as a European perversion.

In Australia that enactment has been so pervasive that Aboriginal people participate in the coloniser’s work, refuting the possibility that non-heterosexuality is culturally authentic.

It is as if history has constructed Aboriginality as being so pure and so savage, so purely savage, that if tainted by the complexity of sexuality, mixed ethnographies, mixed geographies and mixed appearances, the whole look would be ruined. Aboriginal people would be regarded as not pure, not savage.

By highlighting the contingency of existence and engagement in his 1993 book Mimesis and Alterity, the Australian anthropologist Michael Taussig emphasises the limitation of accepting the world as it is presented through a colonising gaze.

Herein lies the opportunity to look to pre-history and make-believe magical visions of spirits, that may be no less or no more real than the really real ways that colonisation imaged our lives. How much potential is there to be free from the shackling forces of colonisation by imbuing our world with new symbols through a language of Queer-Aboriginal creative expression, a creative expression that subverts all languages to imagine alter/native realities?

Maybe history is now ready for Aboriginality to celebrate its own diversities as subjects and objects produced by history and allow for alter/native histories in addition to those imposed through colonisation.

One way of circumventing the effect of colonisation is to draw upon all imaginings of history, including colonial history, to create new mythologies, new artifice that transforms the past, present and future. As French philosopher Roland Barthes put it:

[M]yth consists in overturning culture into nature or, at least, the social, the cultural, the ideological, the historical into the “natural”.

Contemporary Aboriginal artists have the opportunity to tip the ways in which Aboriginality is constructed on its head and “mythologise” it with endless queer potential.

As a method to decolonise, or rather to challenge colonisation, the pre-historic, pre-colonial figure of “the trickster” – a small animal featured in traditional African folktales who uses its wits to survive encounters with larger creatures – may be a useful device to trick colonisation with its own implements or language.

UK-based art critic Jean Fisher supports this idea by proposing that the trickster activates uncertainty through a play of excess, where circulating signs take on new meanings. The ace card held by tricksterism, she argues, is the knowledge that any authoritative discourse is a contingency, not a law of nature or object or truth.

American scholars Henry Louis Gates Jr and Riggins Earl have identified trickster figures in African-American literature: the fictional characters of the Signifying Monkey and Brer Rabbit who overturn their oppressors by their wits alone.

The result is that the “master’s house”, as identified by Caribbean-American writer Audre Lorde, is brought down by the rules of the game, or at least, its structure becomes vulnerable, destabilised.

Aboriginal Mimi spirits – tall, thin beings that live in the rocky escarpment of northern Australia – with their magical powers and trickster antics once mimicked human form and taught my ancestors to hunt, cook and paint. They are credited by my people for creating the first rock paintings, at Nourlangie in Kakadu National Park near Darwin, that are still visible up on the out-of-human-reach heights of tall rock formations. Also part of their subversive nature, Mimis are genderless spirits, not bound by the accruement of human definition.

The trickiness and slipperiness of Mimi spirits inspires my thinking and understanding of the artifice of the colonial depiction of Aboriginality – a depiction that somehow has managed to survive as one and the same copied image.

My expression draws upon the spiritual mythology of my cultural heritage. Like the Native American Trickster, Mimi spirits are transformative figures that have a gift with language, including visual language. As Gates said, they “luxuriate in the chaos of ambiguity”, and can be used to manipulate the double meaning, and more meanings, that words and other signs can produce to speak back to dominant culture.

There are many Aboriginal and/ or Torres Strait Islander artists, writers, scholars, poets and other creators of knowledge who identify as non-heterosexual. Some of us put our work and ourselves in the public domain, and by doing so assert that gender and sexuality is explicitly connected to our cultural identity.

Perhaps what is needed now is the establishment of a field of Queer-Aboriginal studies where we can create discourse to assert ourselves from our own knowledge position.

This is an edited extract from Blak Wave, a new book published by Next Wave, as the keynote initiative of the 2014 Next Wave Festival. Featuring 28 Aboriginal and Torres Strait Islander artists and curators exploring what’s personally, politically and artistically Next for Australia’s Indigenous peoples, Blak Wave is available here.

Troy-Anthony Baylis does not work for, consult to, own shares in or receive funding from any company or organisation that would benefit from this article, and has no relevant affiliations.

This article was originally published on The Conversation.