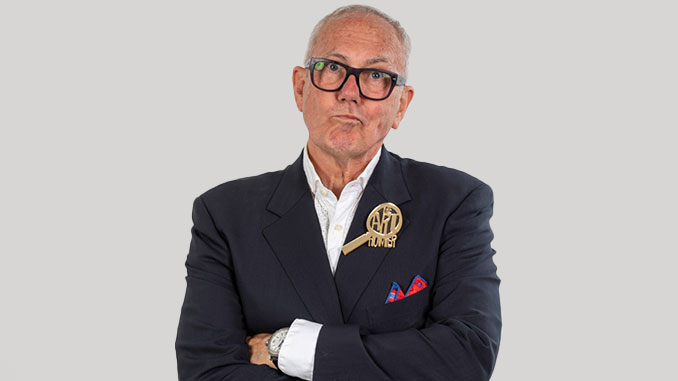 He’s 71-years-old and presenting his first live show in support of the arts at Midsumma Festival. Veteran JOY 94.9 presenter David Hunt is passionate about the arts and supporting artists. He hosts a two hour weekly arts show on JOY – Sunday Arts Magazine.

In recent times, David has launched a weekly YouTube channel – The Art Hunter – where he conducts a one-on-one interview with an artist, up close and personal.

Featured artists cover all disciplines: visual arts, actors, dance, opera, musical theatre, authors, cabaret and theatre/film writers. So successful, The Art Hunter has been picked up by Channel 31 – screening as a weekly show.

“Two years ago when the COVID-19 pandemic started, a lot of my friends in the arts started losing their jobs on stage or their exhibitions were cancelled,” said David. “The more the pandemic took control, the more I felt for the arts.”

“I have made so many lovely friendships with the artists over the years. My first thought was how can I help,” he said. “So I handed over my social media to a different visual artist each week, posting artworks and their story each day, inviting my social media friends to go directly to the artist to buy… it worked!

“I approached visual artist/author/gallery owner Maree Coote who has a gallery and shop on Clarendon Street – Melbourne Style – who suggested to me, before I asked her to give me the front windows of her shop front to exhibit an artist work each week.”

“Maree said you are The Art Hunter! So that’s what we called the project and she even designed the logo! The Window exhibitions were hugely popular,” said David.

“In early 2021, by chance, I met film & television producers, Simon & Tim Barnett. They were using one of the theatres at The Alex Theatre, St Kilda. They knew about my radio show and what I was doing to support the arts and offered me a weekly spot to interview a different artist every week. What an opportunity!”

“With me knowing so many artists I went directly to them and they all jumped at the opportunity,” said David. “Over the past 10 months we have produced 20 plus interview, covering all arts disciplines: play writers, visual artists, opera, cabaret, actors, dance, authors, film directors, and musical theatre.”

“The Alex theatre has been very supportive and late last year they asked if I would like to do a live show as part of the Midsumma Festival, they offered to pay the registration and given me access to the theatre. The Art Hunter presents: Twilight Salon was born!” said David.

The Twilight Salon is a panel show (think ABC’s Q&A), but all about the arts. Over two shows, Saturday 29 January and Saturday 5 February, two performing artists (who will also perform on the night), a visual artist and an arts journalist will be interviewed by David and disect issues affecting the arts industry.

“The Art Hunter gives a platform to hear the stories behind the artwork, and there is nothing more important than these stories within the artwork as they inspire our journey bringing the world alive with depth and meaning…” – Aleksandar Vass OAM, The Alex Press

The Art Hunter presents: Twilight Salon will be presented at the Alex Theatre, St Kilda, on Saturday 29 January & Saturday 5 February, as part of the 2022 Midsumma Festival. For more information, visit: www.midsumma.org.au for details.