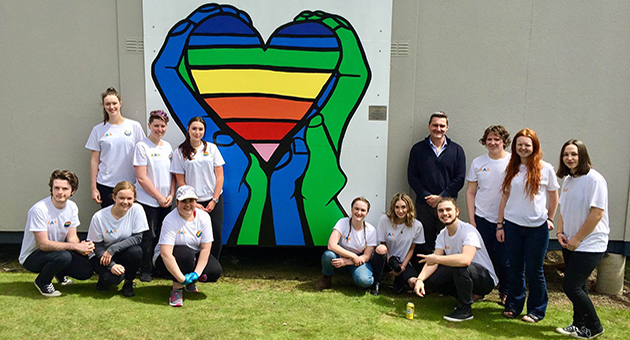 A student association at Don College, a government senior secondary school in Devonport, is behind the mural which was unveiled by prominent Tasmanian LGBTI advocate, Rodney Croome.

“The College Anti-Apathy Association did a survey that found LGBTI inclusion was a top concern along with asylum seekers,” said Don College student, Rowena McPhee.  “The mural is our way to show LGBTI students that Don College is a safe place for them, and to promote inclusive articles in the broader school community. I thank staff and students at Don College for their support and I’m proud we are taking the lead on LGBTI human rights and inclusion.”

The mural, which features hands clasping a rainbow heart, was designed by Zac Harris and has the support of the school principal, John Thompson. “The clear messages are all students have the right to feel safe at school because students learn better when they feel accepted and part of a community,” said Mr Thompson. “Don College is a place of acceptance and tolerance where we celebrate diversity. We all have an obligation of mutual respect and consideration for others.”

The launch was attended by about 200 students, staff and Mr Croome – who is a former student of Don College. “I applaud those Don College students who have gifted their school this wonderful mural, as well as the school’s principal and staff for the support they have given the project,” said Mr Croome. “The mural sends a much needed message of support to LGBTI students and encourages acceptance and inclusion across the whole school.”

“I enjoyed my time at Don College but not feeling able to talk to anyone about being gay was like a cloud hanging over my head. If there is one thing above all else I would like my 16 year old self to see from the future it is this mural,” added Mr Croome.

Don College has a history of LGBTI inclusion. Staff have participated in professional development on LGBTI issues. The school is part of the Safe Schools program in Tasmania. All school toilets are unisex to ensure inclusion for transgender and intersex students.

Image: Rodney Croome with students from Don College in front of the LGBTI Mural