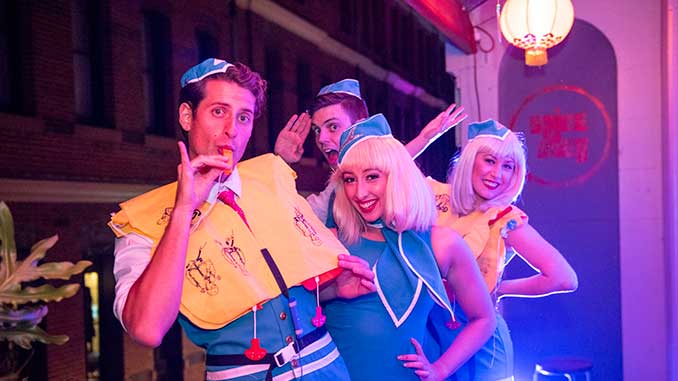 Presented from 16 August – 30 September 2022, the Festival will start two weeks earlier than usual to accommodate over 500 events following an unprecedented response to this year’s registration campaign.

“We have had an overwhelming response to our artist call out this year and are shaping up to be bigger than ever,” said Sydney Fringe CEO and Festival Director Kerri Glasscock.

“This is really an incredible testament to the resilience and passion of the indie arts sector in Sydney, they are chomping at the bit to have their return moment and present all the work that has been bubbling away under the surface during the past two years.”

“There has never been a better time to get out and explore Sydney Fringe, this is our city’s festival and a celebration of all we stand for, so get ready Sydney because Fringe is back!” said Glasscock.

Following a completely sold out season earlier this year, the 2022 Festival brings back the Runaway Gardens and Spiegeltent for its largest activation to date, presented in First Fleet Park, The Rocks from 16 August – 25th September.

Bigger and more provocative than ever, the award-winning Bernie Dieter’s Club Kabarett, hosted by the utterly hilarious, queen of Weimar punk Bernie Dieter, will be filled with dangerously funny kabarett, breathtaking circus, gender-bending aerial and fire-breathing sideshow, set to the soundtrack of a riotous haus band. Visitors will also be treated to a selection of food and beverage pop-ups.

In 2022 the Festival will see a number of new activations and hubs, including a cabaret spectacular by multi-award-winning cabaret company YUMMY presented in partnership with the Darlinghurst Theatre Company, Limitless a new micro-festival celebrating performance and visual artists with disabilities at 107 Projects in Redfern, an expanded kids and family program, plus free events, street parties and activations all across Sydney.

For the first time, visitors will be able to curate their festival experience with the Cultural Concierge presented in partnership with World Square alongside a new commissioned inflatable artwork by Goldberg Aberline Studio.

Sydney Fringe will again team up with Tortuga Studios for Babylon, a free party that will take over Chippendale’s Kensington Street and Spice Alley with light sculptures and projections, live music, dancing, soundscapes, food, performance and drinks.

The team at Marrickville Metro have also partnered with Fringe to bring the best of the inner west to their al fresco dining precinct Smidmore Street, with three days of live entertainment and food from Smidmore Street restaurants.

Returning hubs for the Festival in 2022 include an expanded Touring Hub, with a new home at The Seymour Centre and an extended program of award-winning shows from Adelaide Fringe, Perth Fringe, Melbourne Fringe, New Zealand Fringe and more; the Emerging Artists Sharehouse at Erskineville Town Hall; Fringe Comedy returns to the Factory Theatre with 100+ shows; and City Tattersalls will present the Musical Theatre and Cabaret Hub at the historic Castlereagh Hotel.