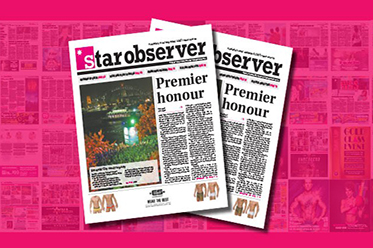 Australia’s leading gay and lesbian newspaper, the Star Observer is embarking on a new direction, ceasing its weekly edition and becoming a new-look monthly publication from April.

Publisher Daniel Bone told Melbourne’s Joy 94.9 radio station this morning that, “given more people visit the publication online, it makes sense to focus less on news and more on long-form features in the print publication.”

“We’re looking at expanding the format of the print publication so stories have the space they need, and we’re looking at increasing the number of people we have as opinion writers and commentators from the broader community.”

Bone said part of the difficulty for the Star Observer is that as homosexuality becomes normalised in the community it’s become harder to reach large numbers of the paper’s readers through venues like gay bars.

“The community has changed, and that’s something we should celebrate. People are living more diverse lives in more areas in the community,” said Bone.

A community owned, not-for-profit social enterprise, the Star Observer has been published since 1979.  In 2012, the Sydney Star Observer and Melbourne’s Southern Star Observer merged to create a national publication. It currently has a weekly circulation of 18,000 copies.

The new monthly publication will have a focus on news features, in depth stories and profiles, analysis and opinion. There will be a round-up of news bulletins from the month, as well as a variety of arts/entertainment, lifestyle and culture feature articles.

The Star Observer will cease its weekly print edition on 21 March, with the monthly edition commencing from 17 April. For more information, visit: www.starobserver.com.au for details.

Image: courtesy of the Star Observer