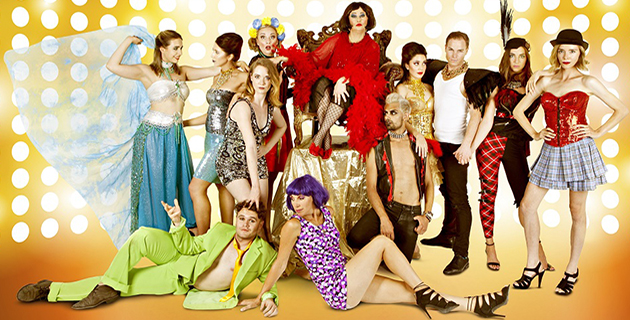 A glitzy comedic musical tribute to all things we love, hate and love more about Eurovision, Song Contest – the Almost Eurovision Experience will premiere at The Alex Theatre for a strictly limited season from 1 April 2016.

Way over the top, interactive, sparkly, a cross between a musical comedy, a concert and a live sporting event – it will be loud, fast-paced and ends in a nail-biting finish. Eleven countries compete and just like the real thing, the audience votes determining who will win at each performance.

Produced and directed by Glynn Nicholas, Song Contest – the Almost Eurovision Experience showcases an amazing cast, celebrity cameo appearances and featuring legendary comedian Bev Killick as Bettina Bitjakokov, the Belarusian hostess with the moistest. As any fans of Eurovision might expect there will be drama backstage and something may not go according to plan!

Performing original love songs, funky pop and possibly one power ballad that is just a bit wrong. Wind-blown hair, costume malfunctions, weirdness, slick choreography, explosive lighting and more clackers and flags than is wise, this show will excite any die-hard Eurovision fan and lure new ones into this party-like experience.