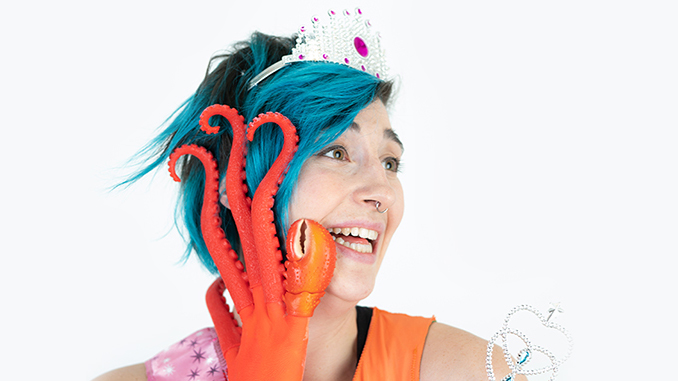 The upcoming Fringe show, ironically named Something in the Water, has an extra layer of complexity as the transgender star; S.E. Grummett (Grumms) has been a fish out of water after being stuck in Australia since last year’s Adelaide Fringe!

“Not being eligible for Jobkeeper or Jobseeker, it’s been a hell of a ride getting to Adelaide Fringe 2021,” said Grumms. “No one planned for COVID and the arts industry has been impacted catastrophically and my story is just one of many caught in the collateral damage.”

The Canadian comedy-darling, Grumms brings an all-new solo-show of monsterous proportions inspired by their experience growing up transgender. The show is a comedic deep dive into gender.

“I never felt connected to the female roles I was cast in,” said Grumms. “The first summer of my Fringe tour, I met my first non-binary person when I went to Toronto and I remember thinking “that’s a thing you can be?”

“Things really started to fall into place, genderwise once I started performing a children’s show with puppets. I got to perform every gender under the sun. I wasn’t forced to be a graceful lady and I was suddenly more free to explore what felt natural: being a girl wasn’t right anymore.”

Something in the Water is a celebration of the ‘not normal’ – queer bodies and gender expressions deemed ‘unnatural’ by our society. The show parodies the masculine & feminine, and show how absurd rigid gender binaries can be.

Audiences will be spellbound by; stunning video projections, slapstick and satire; all are stirred up together with Grummett’s glowing and playful performance. With the perfect balance of absurdist physical comedy and vulnerable self-exploration, the show weaves a touching story of acceptance that anyone can relate to.

Grumms is a transgender theatre artist and performer from Saskatoon/Treaty 6 Territory (that’s the flat part of Canada). After graduating from acting school and becoming increasingly frustrated with the lack of opportunities for queer and trans folx, Grumms began Scantily Glad Theatre, an LGBTIQ+ theatre company that works to promote queer artists and stories.

For the past 5 years, Grumms has created and toured original queer shows to Fringe festivals and stages across North America. They are the co-writer and performer of Pack Animals, and SCUM: a manifesto. Outside of Fringe, they also work as a projection designer and puppeteer.

Here in Australia, Grumms premiered Creepy Boys at Melbourne Fringe in November. An absurdist comedy, Grumms and their partner created Creepy Boys during the second lockdown in Melbourne.

Their solo-show, Something in the Water was created in 2019 and explores Grumms’ gender journey from discomfort to discovery to coming out as transgender & non-binary.

This show, a queering of classic monster movies, is currently being readapted with the help of collaborators Deanna Fleysher (Butt Kapinski), and queer puppet company, Mind of a Snail (Multiple Organism).

Scantily Glad Theatre is the new and exciting voice of queer comedy from Canada. After a critically-acclaimed North American tour, Something in the Water promises to be one of the most unique shows at the Adelaide Fringe – don’t miss it.

“Grummett is a strong physical performer. They’re also laugh-out-loud funny and their infectious silliness meant that the active participation asked of the audience never felt like effort.” – The Star Phoenix)