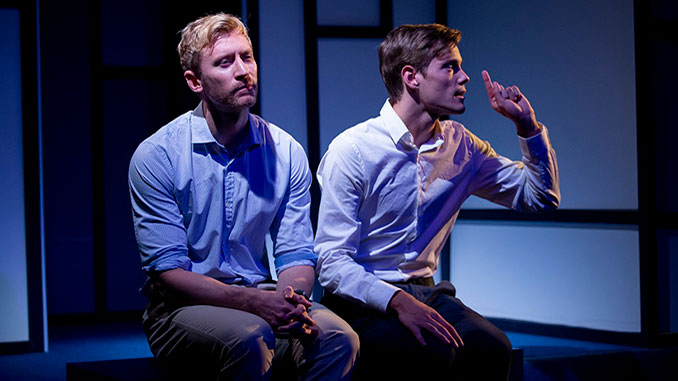 New Theatre is thrilled to be presenting the Australian premiere of Significant Other – a delightful contemporary queer rom-com from one of America’s most acclaimed young playwrights, Joshua Harmon.

Jordan Berman is young, single, Jewish, and gay. He lives in New York, has a good job, a great apartment and a fabulous trio of best girlfriends. Only one thing is missing from his life.

Being a romantic dreamer, Jordan develops a crush on a cute co-worker, obsessing over every little detail: his shoulders, his sneakers, the way he sips his coffee. This leads to a ‘first date’ of excruciating awkwardness and then the slow realization that his feelings aren’t reciprocated.

Another date turns out to still be recovering from a break-up. Another isn’t interested in anything ‘long term’. As one by one his posse of gal-pals find love, and life becomes a whirl of wedding showers, bachelorette parties and marriage ceremonies, Jordan starts to fear he’s running out of time.

Despite the wisdom imparted by his grandmother Helene, who tries to explain that he’s merely stuck in a bad chapter in a long book, Jordan isn’t convinced that his story is moving towards ‘happy ever after’ with his prince.

Though full of laughs and wise-cracking, whip-smart repartee, Significant Other is also a clear-eyed, unsentimental look at what happens to friendships when people start to pair off, and the profound loneliness of being single when all you desire is a soulmate.

Taking the helm of Significant Other in his New Theatre debut is director Hayden Tonazzi. “Coming out of NIDA, I was aware that New Theatre offered a fantastic platform that many past NIDA directors had engaged with to produce exhilarating contemporary work in Sydney (Riley Spidaro with This Bitter Earth, and Warwick Doddrell with Stupid Fucking Bird) and I was really keen to work with them,” says Hayden.

“When Artistic Director Louise Fischer pitched Significant Other to me, I knew it was a story I wanted to be part of sharing. The journey of this play is absolutely hilarity until it turns to absolute heartbreak. Jordan Berman is every gay man navigating queer love in our contemporary world. With no mentors, no advice, but a heart as pure as gold, we see this yearning for connection become his ultimate downfall.”

“For me, as a young queer male, this piece captured a concern that we all have. It asks the question: what happens if I don’t find the love of my life? How do I navigate being alone, when everyone around me has found love?” says Hayden.

There is no doubt that there is a shortage of opportunities for actors at the moment as the industry is just beginning to restart. This put New Theatre in a unique position, where not only did they receive over 100 auditionees for just six roles, but also so many of these performers were extremely well-trained and professional actors.

The cast and creative team Hayden has assembled consist some of the most exciting young talents coming out of drama schools, including NIDA (Lighting Designer Morgan Moroney, returning to New Theatre after working on This Bitter Earth, and actor Matthew McDonald making his New Theatre debut), Actors Centre Australia (Isabella Williams and Laura McInnes, both working here for the first time) and the Academy of Film, Theatre & Television (Asian-Australian actor Dominique Purdue, back at New Theatre after her appearance in Collaborators).

Combine these exciting emerging talents with one of Sydney’s most respected and seasoned performers in Helen Tonkin (who is also an acclaimed director, including the Sydney Theatre Award multi-nominated production of Jez Butterworth’s Jerusalem, and serves as New Theatre’s Artistic Associate), and we have a really exciting team.

A graduate of the Playwrights Program at Juilliard, Joshua Harmon is an award-winning playwright, whose works in addition to Significant Other include Bad Jews, Skintight and Admissions. His plays have been produced across the USA, and internationally in Australia, Canada, Germany, Ireland, Israel, Poland, Russia, South Africa, Sweden, and throughout the UK. He is a two-time MacDowell fellow and an Associate Artist at Roundabout.