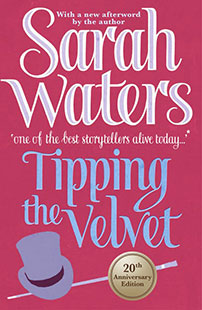 Set in the music halls of the late 19th century, Sarah Waters’ wonderfully lush, sensuous and bawdy debut novel, Tipping the Velvet, was highly acclaimed and was chosen by The New York Times and The Library Journal as one of the best books of 1998.

Piercing the shadows of the naked stage was a single shaft of rosy limelight, and in the centre of this was a girl: the most marvellous girl – I knew it at once! – that I had ever seen.

King is captivated by the music hall phenomenon Kitty Butler, a male impersonator extraordinaire treading the boards in Canterbury. Through a friend at the box office, Nan manages to visit all her shows and finally meet her heroine.

Soon after, she becomes Kitty’s dresser and the two head for the bright lights of Leicester Square where they begin a glittering career as music-hall stars in an all-singing and dancing double act. At the same time, behind closed doors, they admit their attraction to each other and their affair begins.

The novel was adapted into a somewhat controversial three-part series of the same name produced and broadcast by the BBC in 2002 and a stage play in 2015. To celebrate its twentieth anniversary, Tipping the Velvet was reissued with a new introduction by the Author.

Sarah Waters is the New York Times best-selling author of The Paying Guests, The Little Stranger, The Night Watch, Fingersmith, Affinity and Tipping the Velvet. She has three times been short-listed for the Man Booker Prize, has twice been a finalist for the Orange Prize, and was named one of Granta’s best young British novelists, among other distinctions.

Tipping the Velvet is published by Hachette Australia (Virago) and available from all leading book retailers including Dymocks.