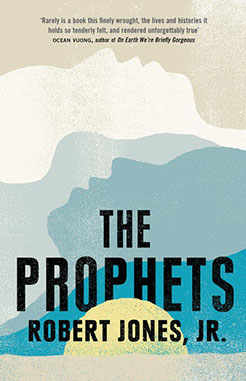 In this blinding debut, Robert Jones Jr. blends the lyricism of Toni Morrison with the vivid prose of Zora Neale Hurston to characterise the forceful, enduring bond of love, and what happens when brutality threatens the purest form of serenity in The Prophets.

The Halifax plantation is known as Empty by the slaves who work it under the pitiless gaze of its overseers and its owner, Massa Paul.

Two young enslaved men, Samuel and Isaiah dwell among the animals they keep in the barn, helping out in the fields when their day is done.

But the barn is their haven, a space of radiance and love – away from the blistering sun and the cruelty of the toubabs – where they can be alone together.

But, Amos – a fellow slave – has begun to direct suspicion towards the two men and their refusal to bend.

Their flickering glances, unspoken words and wilful intention, revealing a truth that threatens to rock the stability of the plantation. And preaching the words of Massa Paul’s gospel, he betrays them.

The culminating pages of The Prophets summon a choral voice of those who have suffered in silence, with blistering humanity, as the day of reckoning arrives at the Halifax plantation. Love, in all its permutations, is the discovery at the heart of Robert Jones Jr’s breathtaking debut.

Robert Jones, Jr. is a writer from Brooklyn, N.Y. He earned both his B.F.A. in creative writing and M.F.A. in fiction from Brooklyn College. His work has been featured in The New York Times, Essence and The Paris Review. He is the creator of the social justice social media community, Son of Baldwin. The Prophets is his debut novel.

The Prophets is published by Hachette Australia and available from all leading book sellers including Dymocks.