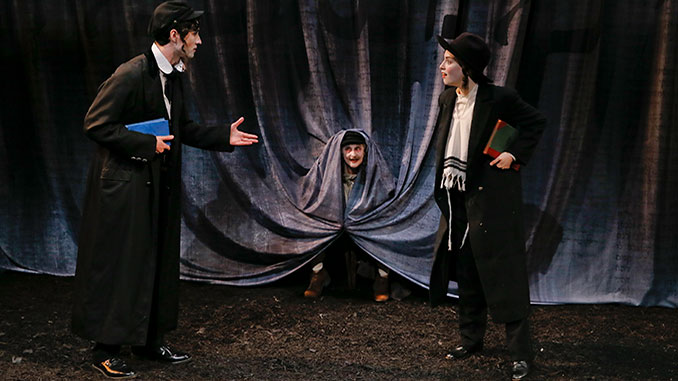 Kadimah Yiddish Theatre’s production of Yentl weaves this multilayered story of identity and perseverance in the face of absolute adversity, through language, culture, and some very playful staging, to create a solid and confident adaptation of Isaac Bashevis Singer’s short story.

Yentl dreams of a world where she can learn, a task so simple and a right so easily taken for granted, but for a woman born into her time, she is denied this most basic of needs. Her father teaches her in secret but soon, Yentl must embark out into the world on her own and in doing so, she soon discovers that there is more to her soul than appears on the surface.

Gary Abrahams, Galit Klas and Elise Hearst’s adaptation is deeply emotive and rich with subtext. The script finds a good balance in the way it bounces between religion, culture and soul – allowing characters to comment on the themes raised from different angles.

There are a few creative choices that leave the work wanting and the run time is just a little on the long side, but the writing is never afraid to cut deep and explore the complexities of tradition, family and self with utter frankness.

Abrahams directs the piece with a mischievous abandon – moving the story along with a rhythmic and bouncy pace, keeping the narrative urgent and the characters believably unsettled. However the characters are often let down by inconsistent direction and one dimensional intentions that leave them with little depth or subtleties.

Jana Zvedeniuk is nothing less than astonishing as Yentl – delivering a performance rich in vulnerability, strength and focus. Zvedeniuk respectfully navigates the character’s complex relationship with gender and their physicality, connecting with the character on a genuine level that never once feels like a caricature.

Evelyn Krape brings multiple characters to life through the whimsical and sometimes sinister narrator, The Evil Inclination. Krape’s performance often ranges from faultless to exhaustingly overacted – never quite settling into either lane and at times working at odds with the overall tone of the piece.

Genevieve Kingsford and Nicholas Jaquinot round out the ensemble, showcasing their talents in characters that are sadly underwritten and superficially directed.

Dann Barber’s set and Rachel Burke’s lighting beautifully work insync – a perfect symbiosis that transports the audience to the many worlds that Yentl passes through.

Russell Goldsmith’s sound design gives the production an ethereal feel – transporting the world of the play to somewhere that is not quite known but at the same time, all too familiar.

Overall this production of Yentl feels like a more grounded and whole representation of the source material and a brilliant way for an audience to experience the world through another’s eyes.