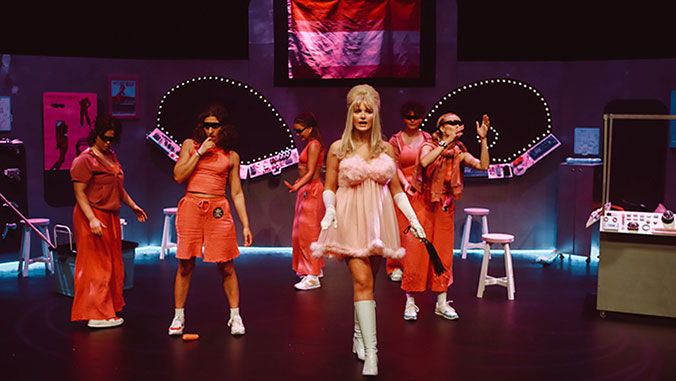 Retro sci-fi stage production SLUTNIK™ sprinkles in delight with sincere rocket scientist (Olivia Mcleod) and her Motherboard (Myfanwy Hocking) heading a fleet of lesbian cannibals away from the gendered perils of earth.

Pretty in their pink overalls embalmed in a rosy light, the crew prance around jovial from a baby-gay love story to an epic open-mic poetry night while preparing for lift-off. World leaders hunt for their base to terminate the mission.

Motherboard – a computer learning from its crew and reflecting in first-person as a somewhat confused narrator – observes and absorbs their queer culture and chatter to build an adequate knowledge base to yeet off the planet and survive in the ether.

SLUTNIK™ docks itself in an incongruent space between its frivolity and dangerous reality. The cosmic fugitives satirise real-to-life social issues instead of playing to a doomsday tune.

They teach Motherboard how to fake an orgasm through a chorus of sex jokes with local idioms: What to say to the friend you’re stalling at Edinburgh Gardens? ‘I’m coming.’ Motherboard, in turn, gives a virtual reality instructional on giving and receiving pleasure in low gravity, their bodies entwining in an aerobic spectacle.

The show-and-tell humour lands with perfection per writer and director duo Flick and Tansy Gorman’s collaborative queer theatre-making – and with some intellectual base. Behind the laughs, the characters exhibit rage, and grief too, at the earth’s enslavement of their reproductive bodies.

The writing offers fierce commentary on forced contraception and medical gaslighting and negligence toward chronic illness. With this, an (unanswered) question looms over the crew: how to care for the female and non-binary body when it runs away from modern medicine?

The play relies on naïve hope in their mission and offers a cheerful, sexy alternative to the usual cynicism of apocalyptic futures. But as Motherboard wonders about the intricacies of a lesbian space order, SLUTNIK™ struggles to concentrate on big questions beyond its glittery extraversion.

Early in the production, Motherboard comments on difficulty linking knowledge with feeling. SLUTNIK™ orbits the opposite way. The lesbians ravenously devour the meat of men, commenting that as men fed on women like parasites, now lay the need to reabsorb them: “It’s political, not tasty.”

But exploring retribution for the deprivation of women ends with their snack. They also fret over the women left behind, loosely noting the limits of activism or, reading between the lines, perhaps, the flawed motives of white and class-privileged feminists.

SLUTNIK™ offers a lesbian cultural reset for the intergalactic realm – an irresistible concept for entertainment’s sake. But promising metaphors don’t always emerge from its giddiness, reminiscent of a TikTok sound circling this week, originating from The Six Idiots, where audio cuts off a group laughing over a sensitive topic by saying, “No, no but it’s not funny, at the end of the day, is it? It’s serious.”

In the final act, the crew prepare for lift-off with anti-climactic effect; SLUTNIK™ warms up with fun, cusps familiar pressure points with its audience and edges toward greater sensation but stays within erogenous foreplay.

According to the program, the production will adapt for each iteration. With this assurance, its opening season’s joyous and aesthetic foundations hold possibility of future explorations diving into the depth of its matter.

Image: The Cast of SLUTNIK™ (supplied)