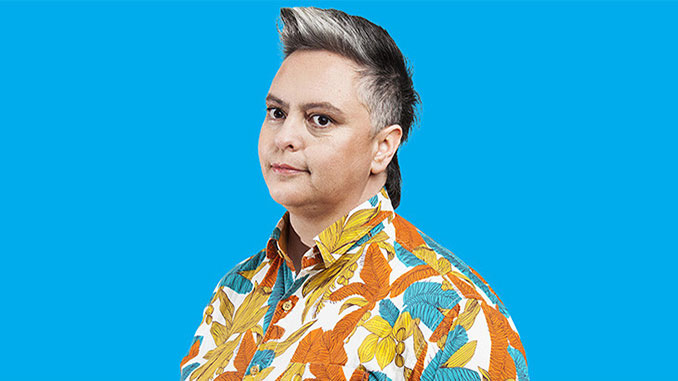 That might seem somewhat whimsical from the veteran stand-up comic known for her deadpan delivery. In recent times, 3RRR breakfast radio host Hickey is on a bit of a tear. At MICF 2019 she won the “Piece of Wood” (comics’ choice) and was nominated for the “Most Outstanding Show” award.

Despite this success, Hickey’s still keen to hold on to some childlike attributes. The possibility of that bouncy castle features in the show’s main thread – asking long-time partner Cath to organise a surprise 40th party, saving Hickey the bother of planning, or even dealing with friends’ enquiries.

Through tales of travel and plans for marriage, Hickey made it clear that she isn’t the organised one in the relationship, and often earned good laughs.

Hickey went a little beyond stand-up by having a go at “documentary comedy”. Following certain tales, video or images projected on a screen would demonstrate the veracity of Hickey’s accounts. Sometimes this was hampered by wind-blown audio.

At other times, such as around an adventure holiday, footage proves that truth can be stranger than fiction. It shows Hickey’s commitment to comedy that she’ll make herself the butt of jokes if it will deliver a good laugh.

Hickey showed that you can entertain a crowd without spending an hour on sex talk and swearing. Whilst there’s not much to challenge in What a Surprise, it’s an easy-going, well delivered show that consistently garnered a good volume of laughter across the room. If the audience’s applause is any guide, this will be a festival highlight for many.