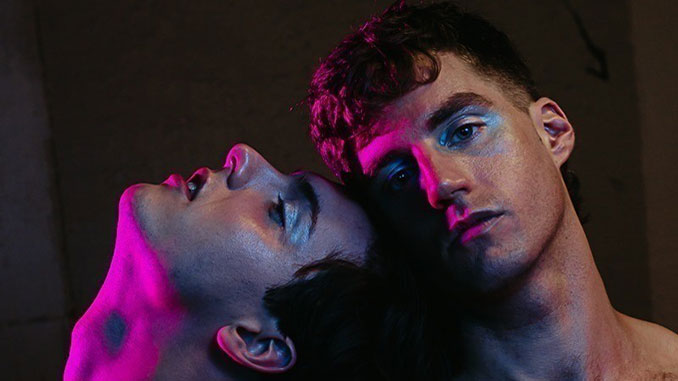 Is Moscow the biggest dirt exporter in Europe? A vexing question that opens DIRT, now enjoying its premiere season in The Arch, at Holden Street Theatres.

It’s a two hander, bringing together real life partners Patrick Livesey and Wil King in a tight, engrossing exploration of being gay in contemporary Russia, against the backdrop of the Chechen Gay Purges.

King plays a seemingly naïve tourist visiting Moscow with his girlfriend. Livesey is a Russian Tour Guide who enjoys tricking unsuspecting tourists, with fake facts. After a tour of Moscow and an exploratory conversation which adroitly dances around some bigger issues than the dirt exportation one, they agree to kick on.

There are hints early, that neither is actually who they say they are and as they drink, party and explore, the truth comes out. Turns out the Aussie is far from there with his girlfriend, and there’s more to the Russian than fooling tourists.

DIRT was written by emerging queer playwright Angus Cameron specifically for Livesey and King. It’s the first time they’ve shared the stage, and the chemistry between them is what makes this production work so well.

The dialogue is sharp, the characters well explored, the staging simplistically effective and the direction (by Bronwen Coleman) as tight as a drum.

By the way, Moscow is not the biggest dirt exporter in Europe! #fakefact

Review: Helen Lewis – courtesy of All About Entertainment