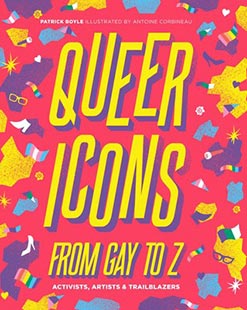 The LGBTQ+ community is a loving family. As such, Patrick Boyle and Antoine Corbineau’s colourful book, Queer Icons from Gay to Z, celebrates our most iconoclastic sisters and brothers (and gender nonbinary friends) across history.

Loaded with trivia and factoids about each icon – this boldly illustrated book unites pop culture icons of the current day with the activists and revolutionaries who fought (sometimes literally to the death) for the right to be who they are, and the right to love whoever they bloody well please.

Patrick Boyle is an Australian writer and editor based in Melbourne, Australia. He contributes to multiple pop culture, arts, lifestyle, satire and queer publications. This is Patrick’s first book. Antoine Corbineau is a French creative living in Nantes. His vivid patchwork illustrations are clearly recognizable, having been commissioned by the likes of The New York Times, Vanity Fair, Facebook, Google, The Guardian, The Hollywood Reporter, and many other global publications.

Queer Icons from Gay to Z is published by Smith Street Books and available from all leading book retailers including Booktopia.