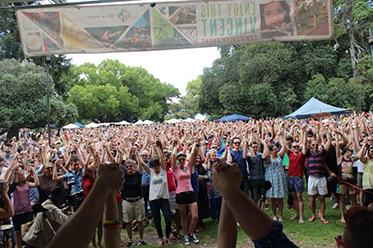 Thousands of patrons at Pride WA’s Fairday on Sunday 16 February joined an international campaign of support for gay and lesbian Russians, as well as gay and lesbian athletes competing in the Sochi Winter Olympics.

The Hold Hands for Sochi initiative is taking place at Remote Pride House events being held in 37 cities around the world during the Sochi Games.  The events aim to raise awareness of the increasingly horrific experiences of gay and lesbian Russians, under new national and local laws.

The Hold Hands for Sochi initiative most recently took place in Sydney this last weekend, where more than 60,000 Mardi Gras Fair Day patrons joined hands in a minute’s silence, as a sign of solidarity.

Pride Western Australia Incorporated Co-President Daniel Smith said gay and lesbian people around the world were increasingly alarmed at what was happening in Russia.