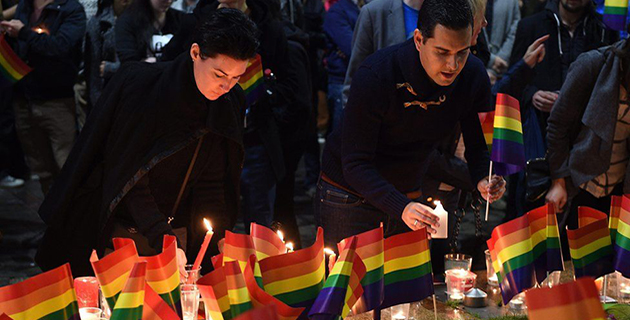 The shooting rampage that left 49 people dead in a gay nightclub in Orlando, Florida, highlights the need for lesbian, gay, bisexual and transgender (LGBT) advocates to be constantly vigilant and vocal.

For every advance in LGBT rights that is made in one part of the world, there are extreme regressions elsewhere. Perhaps this is evidence of Newton’s third law that for every action, there is an equal and opposite reaction. Although when it comes to LGBT rights, the reaction is more excessive than equal.

Global highs and lows
In May, the number of countries that criminalise homosexual conduct fell from 77 to 75. First the Seychelles reformed its criminal laws, closely followed by Nauru. Also last month, Victoria’s state parliament made a historic apology for laws that once criminalised homosexual conduct, which Premier Daniel Andrews described as: … profoundly and unimaginably wrong.

There was also cause for celebration in April when Colombia became the fourth South American country to achieve marriage equality. This followed a court ruling that same-sex couples have a constitutional right to marry.

There have been setbacks for LGBT rights, though. These include the brutal attack last year on participants in the Jerusalem Pride March, which resulted in the death of a 16-year-old girl and the wounding of six others, and the creation of a new offence of “aggravated homosexuality” in Uganda and The Gambia.

However, a court struck down the Ugandan laws as invalid. And three men who were prosecuted last year under the Gambian laws were acquitted.

Notwithstanding these setbacks, there was a sense of optimism that progress was being made and respect for the rights of LGBT people was, on the whole, improving. That optimism came to a screeching halt this week.

What the Orlando massacre demonstrates very clearly is that legalising same-sex marriage does not mean an end to homophobia. The single largest targeted killing of LGBT people in recent times, recognising that the Nazis killed thousands of gay men and lesbians during the Holocaust, occurred in a country where same-sex couples can wed.

Law reform is one of the most powerful ways of protecting LGBT people’s fundamental human rights, including through decriminalising same-sex sexual conduct, enacting anti-discrimination laws that include sexual orientation and gender identity, legalising same-sex marriage and recognising same-sex families.

But recent events should force a rethink on the notion that having laws that mandate equality for LGBT persons will necessarily lead to that community being able to live lives of dignity, free from discrimination, persecution and violence.

Laws can influence societal values, but they are not enough. We need to change the hearts and minds of those who think LGBT people are perverts. Many had no hesitation in voicing their support for the killer and their hatred of gays on social media in the aftermath of the Orlando tragedy.

The homophobia behind the attack
Almost as distressing as those who praised the killer are those who refused to acknowledge that this was an attack on the LGBT community, fuelled by homophobia. Those who failed to acknowledge the sexuality of the victims or the motivation for the crime include the pope and New Zealand Prime Minister John Key.

Why did Guardian journalist Owen Jones walk off the set of Sky News when the presenters refused to acknowledge the Orlando attack was an attack on LGBT people? It is because to be silent about this adds insult to injury. It amounts to erasure of LGBT people at the very time when they have been targeted because of their sexual orientation.

We can’t fix a problem until we recognise there is a problem. Ignoring homophobia makes it impossible to effectively combat it. We can’t expect to avoid future attacks on LGBT people while homophobia remains one of the last “socially acceptable prejudices to have”.

Australia doesn’t have the same gun control problems as the US, but the LGBT community here is still subjected to violent homophobic attacks. The last thing Australians need is a divisive plebiscite on whether same-sex couples should be allowed to marry, which will embolden opponents to voice their hate and fear of LGBT people.

The A$525 million estimated cost of having a plebiscite would be far better spent on expanding the Safe Schools program, which aims to reduce bullying and increase respect for LGBT youth, and on government-led campaigns to tackle homophobia head-on.

One way we can honour the victims of the Orlando shooting is to significantly amplify our efforts to combat homophobia, so that when we do make advances in protecting the rights of sexual minorities, these are not followed by acts of violence against LGBT people.

Image: A candlelight vigil for victims of the Orlando shooting