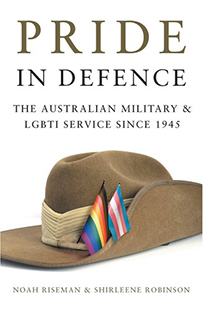 A depiction of the diverse ways LGBTI members of the Australian Defence Force have navigated life in a challenging social environment, Noah Riseman & Shirleene Robinson have co-authored, Pride in Defence – The Australian Military and LGBTI Service since 1945.

Since the Second World War the Australian military has undergone remarkable transformations in the way it has treated lesbian, gay, bisexual, transgender and intersex service members: it has shifted from persecuting, hunting and discharging LGBTI members to embracing them as valued members who enhance the Force’s capabilities.

LGBTI people have served in the Australian military since its very beginnings, yet Australian Defence Force histories have been very slow to recognise this. Pride in Defence confronts that silence.

It charts the changing policies and practices of the ADF, illuminating the experiences of LGBTI members in what was often a hostile institution. Drawing on over 140 interviews and previously unexamined documents, Pride in Defence features accounts of secret romances, police surveillance and traumatic discharges.

At its centre are the courageous LGBTI members who served their country in the face of systemic prejudice. In doing so, they showed the power of diversity and challenged the ADF to make it a far stronger institution.

Noah Riseman is Professor of History at Australian Catholic University, where he specialises in Australian histories of sexuality, gender and race. He is author or co-author of five other books, including: Defending Country: Aboriginal and Torres Strait Islander Military Service since 1945 (2016); Serving in Silence? Australian LGBT Servicemen and Women (2018); and Indigenous Peoples and the Second World War: The Politics, Experiences and Legacies of War in the US, Canada, Australia and New Zealand (2019).

Shirleene Robinson is Senior Curator of Oral History and Indigenous Programs at the National Library of Australia and Honorary Associate Professor of Modern History at Macquarie University. Her most recent authored or co-authored books include Gay and Lesbian, Then and Now: Australian Stories from a Social Revolution (2016); Yes Yes Yes: Australia’s Journey to Marriage Equality (2018) and Serving in Silence? Australian LGBT Servicemen and Women (2018). Her current research interests include the history of sexuality, oral history and the HIV and AIDS epidemic.

Pride in Defence – The Australian Military and LGBTI Service since 1945 is published by Melbourne University Publishing and available from all leading book sellers including Booktopia.

Image: Pride in Defence – The Australian Military and LGBTI Service since 1945 – courtesy of Melbourne University Publishing