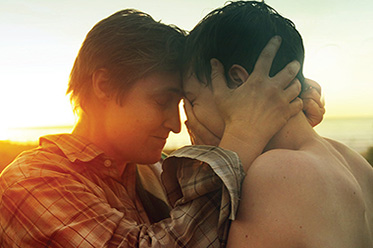 The annual Melbourne Queer Film Festival (MQFF) has launched its 24th program, announcing the full program of 162 films and events on offer at the 2014 festival.

Celebrating and exploring queer in all its forms, this year’s Festival slate will once again showcase the best of GLBTI contemporary cinema from Australia and around the world, with many films having made their mark on the international film festival circuit.

“The MQFF is excited to be presenting such an outstanding selection of films this year, having had over 700 to choose from,” said Festival Director Lisa Daniel.

“And to add to an already packed program, the MQFF is also bursting at the seams with other events like our Film Industry Day and gen2gen Community Film Project for aspiring filmmakers.”

The Festival will kick off in style with the highly anticipated and winner of over 10 Film Festival Audience Awards, Any Day Now from director Travis Fine. Set against the backdrop of the 1970s and inspired by a true story, Any Day Now is an emotionally powerful tale of love and acceptance which follows a gay couple’s fight to adopt a neglected boy with Down syndrome.

Eleven days later the Festival will close with Reaching for the Moon, the sophisticated and passionate tale of an unlikely romance between Pulitzer Prize-winning poet Elizabeth Bishop (Miranda Otto) and renowned architect Lota de Macedo Soares (Glória Pires). Winner of the Audience Award at both Frameline and L.A. Outfest LGBT Film Festivals, this film from Academy Award nominated filmmaker Bruno Barreto is an erotically charged and vibrant tale of two taboo-breaking women.

Marking the halfway point of the Festival, this year’s Centrepiece Presentations include Gerontophilia, a delicate depiction of cross-generational romance from the normally controversial Canadian filmmaker Bruce LaBruce and the Australian Premiere of Bad Hair – an astute and powerful story of a boy and his embittered single mother, which won the Best Film prize at the prestigious San Sebastián Film Festival.

MQFF audiences are in for a treat with an exceptional collection of Special Presentations, including the 20th anniversary screening of the iconic The Adventures of Priscilla, Queen of the Desert and a screening of the remastered 1961 film Victim – one of the first films to address Homophobia head-on.

Check out Lee Gambin’s queer reading of Hollywood cartoons such as Bugs Bunny and The Lion King in Such Intersssssting Lives, and celebrate the 10th anniversary screening of The Tasty Bust Reunion documentary (20 years after the event), which will be followed by a panel discussing the changes that have transpired for the GLBTI community and the police over the past two decades.

Australia’s creative talents are featured in a special sneak preview of the highly anticipated 52 Tuesdays, the extraordinary directorial debut feature from Sophie Hyde. Shot every Tuesday for 52 consecutive weeks, the film follows the story of 16-year-old Billie whose life takes an unexpected turn when her single mother reveals plans to gender transition.

With a mesmerising performance from Tilda Cobham-Hervey, 52 Tuesdays was selected for this year’s Berlin Film Festival and is the winner of the World Dramatic Directing Award Sundance Film Festival 2014, and the award for Best Film in the Generations 14 section. Book early for this one as cast and crew will be in attendance, and it will only screen once.

There is a wealth of award-winning features straight from the international film festival circuit including the visually stunning Five Dances from writer/director Alan Brown, which offers a sensual glimpse of life and first love in the downtown contemporary dance world; Pitstop is the highly praised new film from director Yen Tan (Ciao, MQFF 09) which depicts a series of characters living in small-town Texas, among them two lost gay men in their mid-30s; and don’t miss the opportunity to see Nepal’s first lesbian feature film – the beautiful and critically acclaimed Soonagava – Dance of the Orchids.

Other feature film highlights include the Australian Premiere of Burning Blue, an intense and emotional drama which exposes the modern day witch-hunts that still exist in many conservative organisations; the hilarious teen comedy, G.B.F, will delight audiences with its pumping soundtrack and gaymazing assemble cast including  Will & Grace’s Megan Mullally and Harry Potter’s Evanna Lynch; and check out the fascinating road movie Noor, which follows Shagiq (Noor), a headstrong transgender man who no longer feels part of Pakistan’s transgender community the Khusras.

Younger audiences can explore gender and sexuality issues in the four programs of The Queeries shorts. Plus this year the perennial favourite Celluloid Casserole returns to LOOP with a deliciously eclectic menu of new Australian shorts. For the first time this year, the MQFF Festival Lounge will take over the trendy and relaxing space of Optic Kitchen + Bar.  Drop in for a coffee, alcoholic beverage or a delicious bite to eat and check out some the special events on offer including DJ’s, networking and gay bingo!

The largest film festival of its kind in Australia, MQFF will run for 12 days from 13 – 24 March, with films screening at Australian Centre for the Moving Image, Hoyts Melbourne Central and LOOP Bar. For more information and full program, visit: www.mqff.com.au for details.