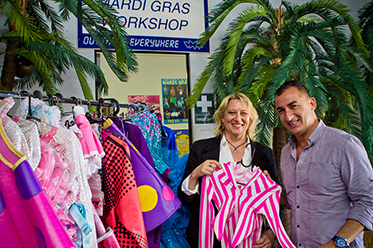 The excitement for the 2014 Sydney Gay & Lesbian Mardi Gras is getting stronger by the day with the opening of the Mardi Gras Workshop in Rosebery and the new Arts workshop fund.

The opening signals the start of two months of hard work by the Mardi Gras creative teams and members of the community to produce the fabulous Parade floats, costumes, scenery and props that make the Parade and all Mardi Gras events sparkle.

As per the annual tradition, the open day saw the workshop blessed by the Sisters of Perpetual Indulgence, to ensure a safe building season in the lead up to Mardi Gras 2014.

As float builders started preparing their streamers, glitter and high heels, building experts from years past were on hand to lend advice and excite a new troupe of Mardi Gras volunteers.

This event also served as the first announcement of Mardi Gras Arts (MGA), an initiative which has been set up to raise funds for long-term and much needed projects such as the establishment of a permanent Mardi Gras workshop.

“We’re excited to have announced the launch of this initiative which we hope will ensure the long term future of the workshop,” says Festival Producer, James Rongen-Hall.

“In the meantime, we’re looking forward to two months of glitter and glam flying around our workshop in anticipation for the fabulous parade! There is a lot of hard work ahead.”

The workshop is not just the Mardi Gras’ “nerve centre”, producing the event’s glamourous and world-renowned artistry, but it’s also a centre for creative exchange and collaboration within the GLBTQI community. Without the workshop, the parade can’t happen!

“In recent years our workshop has been secured at the last possible moment as we move from venue to venue each year, creating instability for both the organization and the community,” says Mardi Gras Board Associate, Michele Bauer.

“Without a workshop, we don’t have a parade and without a parade there is no Mardi Gras. We need a holistically sustainable creative space to support GLBTQI artists and creatives. Our hope is that the MGA will make this happen.”