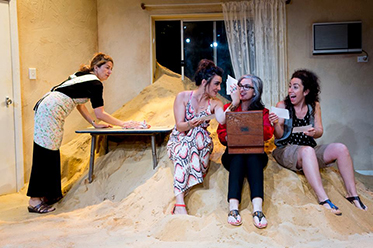 Looking deep into the heart of Sydney and beyond, Jump for Jordan unpacks the experience common to countless second-generation Australians of being caught between two cultures.

Aspiring archaeologist Sophie left home when she was only 20, much to the shame of her traditional Jordanian mother. Six years later, losing sleep and petrified by the judgement of her visiting ‘mad Arab’ Aunty Azza, Sophie is forced to lie about her life, her career and the existence of her Aussie partner. Worst of all is the fear that she’s also lying to herself.

Sifting through shifting layers of past and present, farce and fantasy, it’s one woman’s mad, messy excavation of her own history, and her attempt to piece together the broken bits of her identity.

Donna Abela’s Jump for Jordan took out the Griffin Award in 2013, wowing the judges with its vitality and ambition. This world premiere production is directed by Griffin Studio director Iain Sinclair.