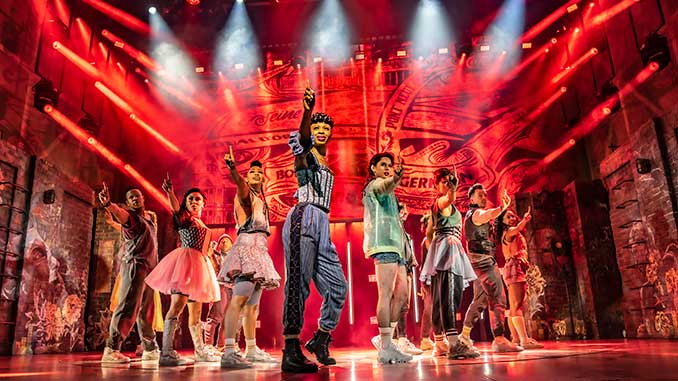 The West End’s award-winning anthemic pop musical, & JULIET, will make its Australian premiere at the Regent Theatre from February 2023 in a new production exclusive to Melbourne.

Along with the originating producers, Michael Cassel, together with creators Max Martin, David West Read, Luke Sheppard and Jennifer Weber, joined Minister Pakula today in announcing that Melbourne had secured the Australian premiere of the new musical.

“& JULIET takes the greatest love story of all time and gives it a brilliant 21st century remix,” said Australian Producer Michael Cassel. “It’s big, it’s bold, and it’s a true celebration on stage, overflowing with amazing pop music by the legendary Max Martin who has had more #1 hits than any other artist this century.”

As audiences, more than ever before, we want to feel uplifted, we want to celebrate, we want to have a great time. & JULIET gives us all of that. We can’t wait for Melbourne to see this show,” said Cassel.

“Melbourne is Australia’s theatre capital. Hit shows like & JULIET attract thousands of visitors to Melbourne, boosting hotels, restaurants, and small businesses. We continue to add to our stellar calendar of major events because it means jobs for Victorians,” said Minister for Tourism, Sport and Major Events, Martin Pakula.

& JULIET first premiered on London’s West End in 2019, was nominated for 9 and went on to win 3 Olivier Awards, as well as 6 WhatsOnStage Awards, the most of any production that year. Melbourne will be the third city after London and Toronto to host this critically acclaimed new musical.

Featuring the music of legendary pop songwriter Max Martin with a book by David West Read, Emmy®-winning writer of Netflix’s Schitt’s Creek, & JULIET sees Shakespeare’s most famous love story remixed with some of the world’s most loved and glittering pop anthems.

What if the ending we all know so well was just the beginning? What if Juliet chose her own fate?

Follow the original Anne Hathaway as she takes on her husband, William Shakespeare, in a hilarious, inspiring, and poignant celebration of self-discovery and second chances.

Brought to life by an award-winning and critically acclaimed creative team, & JULIET is directed by Luke Sheppard (In the Heights, Rent) with a story by David West Read (Netflix’s Schitt’s Creek), electrifying choreography from Jennifer Weber, and stunning set design from Soutra Gilmour.

& JULIET is presented by Max Martin and Tim Headington and is produced by Martin Dodd, Jenny Petersson, Theresa Steele Page and Michael Cassel. The musical is supported by the Victorian Government’s annual Major Events Fund, through Visit Victoria.

& JULIET will premiere at Melbourne’s Regent Theatre from February 2023. Tickets go on sale from October 2022. Sign-up to the waitlist to be first in line. For more information, visit: www.andjuliet.com.au for details.