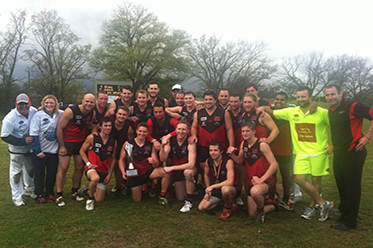 The game, part of the Yarra Valley Mountain District Football League was easily won by Yarra Glen 17.15 (117) to 2.14 (26). Following the game, the Pride Cup was presented to Yarra Glen by Carlton footballer Brock McLean. Brendan James was awarded the Pride Medal for his on-field performance.

Despite the rain, the two teams and local community were more than supportive of Saturday’s game, with rainbow flags flying proudly around the perimeter of the ground, and the Yarra Ranges Council painting the 50 metre lines in rainbow colours.

Brock McLean, the events key-note speaker said it was incredible to see such “a landmark shift” in AFL players speaking up for equality in sport in recent times.

“Days like today and the Pride Cup … you can’t really put into words what it means for one, the gay community, and two, just for that message of acceptance in sport,” McLean said.