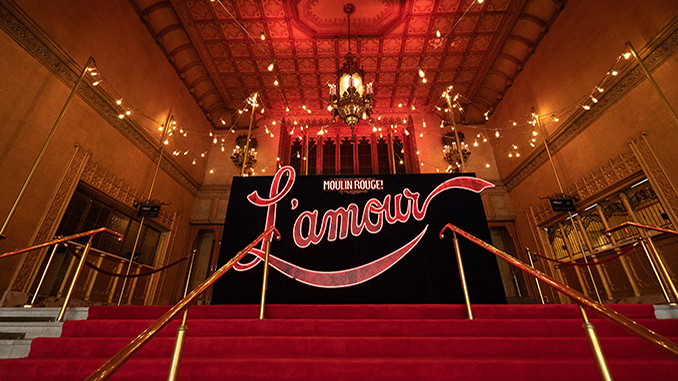 In the week leading up to Valentine’s Day, the iconic L’amour sign from the film MOULIN ROUGE! has been recreated on the steps of the Regent Theatre to celebrate the return of theatre to Melbourne. The installation will be open daily to the public 8 – 14 February inclusive.

“Visit Victoria is thrilled to see the return of live performance to Melbourne and is looking forward to welcoming Moulin Rouge! The Musical to town in August, fresh from Broadway,” said Visit Victoria CEO, Brendan McClements.

“Melburnians can show their love for theatre and our great city with the week-long L’amour sign installed on the red carpet steps of the Regent Theatre.”

Melbourne is the first city to host Moulin Rouge! The Musical since its Broadway debut. The Regent Theatre season coincides with the 20th anniversary year of Baz Luhrmann’s revolutionary film MOULIN ROUGE!

“Moulin Rouge! is a love story about a group of Bohemians fighting to keep their stage show alive, and that has felt very real for us a company, with our Broadway production still on hiatus due to the COVID-19 shutdown,” said Global Creatures CEO and Producer of Moulin Rouge! The Musical, Carmen Pavlovic.

“As an Australian business, to be able to proceed with our Melbourne production, and be in a position where we are now hiring cast and crew, is a tremendous privilege. The iconic line – ‘To Truth, Beauty, Freedom and, above all, Love’ – is indeed very close to home this year. We love theatre, we love the joy it brings, and we cannot wait for the red windmill to start turning in Melbourne.”

Enter a world of splendour and romance, of eye-popping excess, of glitz, grandeur and glory! A world where Bohemians and aristocrats rub elbows and revel in electrifying enchantment. Pop the champagne and prepare for the spectacular spectacular… Welcome to Moulin Rouge! The Musical!

In October 2020 Moulin Rouge! The Musical was honoured with 14 Tony Award nominations including Best Musical. The production was the first Australian-produced musical to originate on Broadway. Take a sneak peek here!

Moulin Rouge! The Musical opens at Melbourne’s Regent Theatre in August 2021. For more information and to sign up to get priority access to tickets, visit: www.moulinrougemusical.com for details.