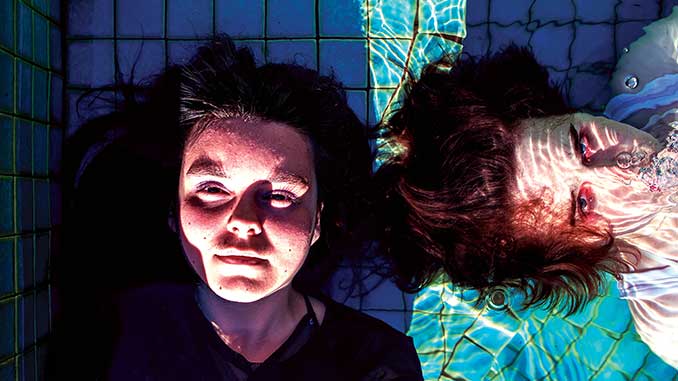 Isla is not telling the truth about anything. Isla has lost her dog. Claire doesn’t know if that’s true. Isla and Claire have been best friends their entire lives. Claire was presumed male at birth. If they were in a different reality, Claire and Isla would be madly in love. But they’re not. They’re here.

In 2018, eva rees landed the role of a lifetime; she was to originate the part of Harry Potter’s son Albus in the Australian premier of Harry Potter & the Cursed Child.

It was this two-year stint contractually binding her to the wrong end of the binary that drove eva to become an artist at the forefront of rewriting the narrative. he/r draws on fact, fiction and feeling to paint a well overdue portrait of who she is; as an artist, and as a person

Conceived, created and developed during her stint as Albus Potter, he/r marks eva’s playwriting debut. She also stars as Claire in this cutting-edge new production directed by her sister, acclaimed young director ruby rees (Punk Rock and Voyage at fortyfivedownstairs).

ruby and eva were presumed female and male at birth respectively. When they were children, all they wanted to do was dream up stories, acting out the parts, living for make believe.

“I first met ruby through our mother. As children we would share stories and she would pretend not to notice when her clothes went missing,” says eva. “She was the first to hold my story, and so it seemed only fitting to ask her to do so again.”

“There are few actions one can take that are as wholly encompassing as a gender transition. My emotional, spiritual, political, and aesthetic wills all coalesce around this singularity, and I spend every day writing and rewriting the terms and meanings of my own body.”

“There are several easy platitudes trans people roll out when speaking about our transitions; platitudes about our objective inner identities, that smooth the contours of our contourless bodies, that we feel honoured to be represented by Caitlin-fucking-Jenner.”

“Foremost, this play begins with the provocation, what if we told trans stories without relying on these platitudes?” said eva.

“It’s an honour to direct my sister’s writing,” says ruby. “I think it’s so important to come back to what my place is inside this space. I’m cis – I’m a visitor and that feels like a privilege. Being invited into someone’s inner world, you must be respectful. It’s like being in someone else’s home.”

“2020 was so hard for so many. I was no exception. I was doing my masters, and restrictions meant that I was locked out of my home state, away from my loved ones and my support network. eva called me when they announced the border restrictions – I was in NSW, she was in Victoria – and she just asked me outright, ‘Am I crossing the border before midnight to get to you?’ I think I just burst into tears.”

“My mental health – like so many Australians, enduring lockdowns alone – was perhaps the poorest I have ever experienced. She came and lived with me for the duration of Victoria’s second lockdown.”

“I am not ashamed to say her presence saved my life. She wrote he/r to pass the time. She had put her own life on hold for mine. I can’t describe how lucky I feel to be building this show with her now, at the end of 2021, back in Melbourne by her side.” said ruby.