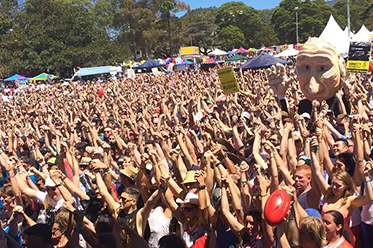 Fair Day was a sea of people as thousands converged the main stage to hold hands as a statement of solidarity with LGBTQI athletes participating in the Sochi games, and LGBTQI people in Russia, at the commencement of the 2014 Winter Olympics in Sochi.

More than 70,000 people were anticipated to attend Fair Day in Victoria Park on Sunday 9 February. This photo will have major international impact in light of the discrimination and human rights abuses being suffered by LGBTQI people in Russia, which have been subject to intense scrutiny in the lead up to the Sochi games.

“This is Sydney’s opportunity to add our voice to the international response to injustices being suffered by LGBTQI people under the Russian government’s anti-gay propaganda laws, as well as to the governments of countries such as India, Nigeria and Iran that their oppressive laws are unacceptable,” stated a media release issued by Sydney Gay and Lesbian Mardi Gras prior to the event.

Pride House International host a Pride House at each Olympic Games, which is a venue welcoming LGBTQI athletes, fans, and others and their allies. The Russian government has banned a Pride House in Sochi, so a series of international satellite events are being held around the world to ensure LGBTQI visibility is a part of the Sochi games.