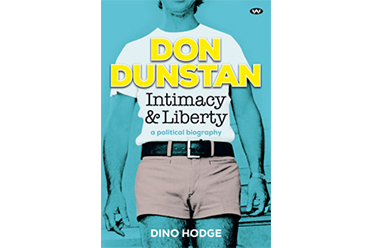 Don Dunstan, Premier of South Australia in the late 1960s and throughout the 1970s, is acknowledged as one of Australia’s foremost civil rights advocates of the twentieth century.

He actively promoted the rights of Indigenous Australians and women, and he passionately pursued multiculturalism. More than any other political leader in the country’s history, Dunstan championed the rights of homosexual citizens at a time when they were treated as criminals, classified as insane, and regarded as outcasts. He was also bisexual.

Don Dunstan – Intimacy and Liberty records the change in public discourse over issues of homosexuality – from morality to state security and then civil liberties. Dunstan worked as a member of parliament for more than twenty-five years, and then throughout the remainder of his life, to realise his vision of full equality for same-sex attracted citizens.

He focused on both legislative and cultural reforms, and introduced changes to the Police Force that were unprecedented and strongly resisted. His efforts and the backlash he suffered are fully documented here for the first time, finally giving due recognition to one of the country’s most remarkable champions of human rights.

Dino Hodge is author of two oral history books, Did You Meet any Malagas? (1993), about Darwin’s multi-racial gay community, and The Fall Upward (1996), documenting spiritual beliefs and practices of lesbian women and gay men.

A theatrical presentation on Darwin’s homosexual personalities, His Own Special Friend, premiered in 1993. It was adapted for performance in an international festival of one act plays that was held in New York during June 1994 to mark the twenty-fifth anniversary of the Stonewall Riot.

He is co-editor of a secondary school social studies text on Aboriginal education, You Don’t Get Degrees in Weetbix Boxes (1994). Born and raised in Adelaide, Hodge lived for many years in the Northern Territory before settling in Melbourne. He has a PhD in history from the University of Melbourne.

Don Dunstan – Intimacy and Liberty is published by Wakefield Press and is available from all leading book retailers. For more information, visit: www.wakefieldpress.com.au for details.