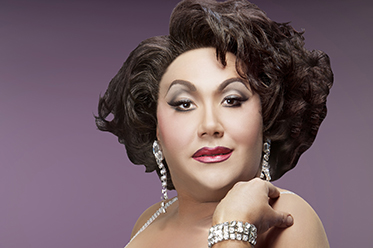 He’s garnered standing ovations and unanimous rave reviews all around the country, and now the irrepressible Trevor Ashley is returning to Melbourne to channel the one and only Dame Shirley Bassey in Diamonds are for Trevor, a spectacular, over-the-top concert extravaganza at Arts Centre Melbourne.

Collaborating again with writer Phil Scott (The Wharf Revue), Diamonds are for Trevor celebrates the musical legacy of one of the world’s most acclaimed concert artists in a stunning evening of song and storytelling, accompanied by a 14-piece orchestra.

Hilarious, brilliant and often moving, Ashley will perform 18 of Bassey’s biggest and best hits, including Big Spender, Goldfinger, Never, Never, Never, This is My Life, History Repeating, and of course Diamonds are Forever – plus a few show-stoppers the Dame should have sung.

Dame Shirley Bassey has become an icon of popular music throughout the past fifty years, and Diamonds are for Trevor is a celebration of her musical legacy in a stunning two-act concert. Using humour, wit and class, Ashley will tell the story of how the Welsh-born singer, who grew up in poverty-type circumstances, became one of the world’s most celebrated concert artists.

Adding to the glamour of the performance, Ashley will be dressed by Oscar, BAFTA, Olivier and Tony Award winning costume designer Tim Chappel (Priscilla, Queen of the Desert).

Soon to be seen in the upcoming season of Les Miserables, cabaret star Trevor Ashley has headlined two of Australia’s biggest musicals (Hairspray, Priscilla) and played every major cabaret stage and festival across the country with his one man shows.

I’m Every Woman sold out six performances at the Sydney Opera House, and Liza (On an E) has garnered standing ovations and unanimous rave reviews at major festivals and the West End (UK). Hilarious, brilliant and often moving, when Ashley goes head to head with the one and only Dame Shirley Bassey, it will prove once and for all that Diamonds ARE for Trevor.

Image: Trevor Ashley as Dame Shirley Bassey in Diamonds are for Trevor