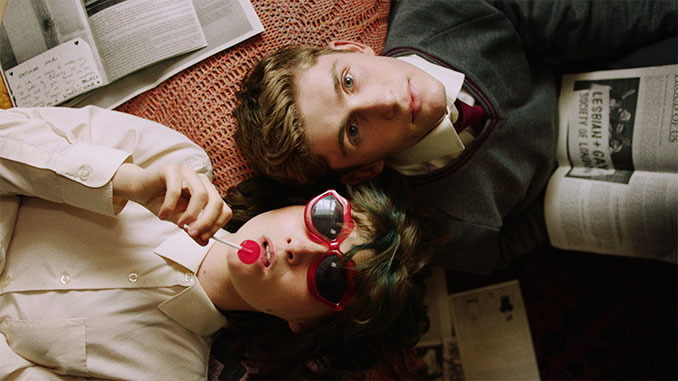 Running from 18 February to 4 March, Queer Screen’s 28th Mardi Gras Film Festival has changed its format to offer audiences for the first time, both an online or in-cinema experience for maximum safety and personal comfort.

“The current on-going challenges of the pandemic has helped us evolve our Festival model to deliver a world class film Festival to the widest audience and in the safest ways possible”, explains Queer Screen Festival Director Lisa Rose.

“After successfully delivering Queer Screen Film Fest mostly online in September 2020, we have expanded on that with a truly hybrid model to provide the collective in-cinema community experience that we all love, alongside a strong on-demand offering.”

“With more than half of the program available online Australia-wide, and over 60 cinema screenings in Sydney, there are so many ways to experience the Festival this year,” said Rose.

Despite a slow-down in film production and distribution in 2020, this year’s Festival will screen 94 feature, documentary, short and episodic films, with 70 percent of those available on-demand.

The Festival opens under the stars for the first time at the Moonlight Cinema with the moving and funny Irish film DATING AMBER which follows a special friendship between a gay man and a lesbian, still an unexplored experience in narrative film.

Dating so the high school bullies will think they are straight, Eddie and Amber come to realise that being someone’s beard has its own issues. This Sydney premiere is a refreshing look at coming out in the 90s, and what it means to be a true mate.

Starring, written, and produced by members of New Zealand’s queer, Māori, and gender-diverse communities, this film perfectly balances drama, humour and heart and shows the power of embracing one’s identity in all its forms when gay transgender activist Caz returns to his isolated hometown in New Zealand.

THE GREENHOUSE, screening as a World premiere from filmmaker Thomas Wilson-White is a magic-realist film asking what would you do, if you could go back in time?

UNDER MY SKIN is an insightful film featuring a very modern love story and a non-binary experience as portrayed by four separate non-binary-identifying actors, including Australian Liv Hewson (Bombshell) and Bobbi Salvor Menuez (Transparent).

The World premiere of THE MAN WITH THE ANSWERS introduces us to uptight Victor who is on a road trip to Germany after his grandmother dies. On the way, he meets the handsome, free-spirited Matthias who charms him into giving him a ride.

SHOWCASE:
The Showcase program strand has been expanded this year to include five international narratives, one international documentary and two Australian narrative features covering a range of themes including immigration, racism, sexuality, long-term relationships, and historical examinations.

As well as THE GREENHOUSE, the showcase includes the Sydney premiere of the gorgeous, Australian lesbian coming-of-age film MY FIRST SUMMER. A sometimes dark, and always stunning film about first love, womanhood and discovering your sexuality.

Acting powerhouses Colin Firth and Stanley Tucci deliver two understated, career-best performances in SUPERNOVA, a drama about a couple dealing with the effects of early-onset dementia on their twenty-year relationship.

Whilst the Australian premiere of THE WORLD TO COME gives us outstanding performances from Katherine Waterston and Vanessa Kirby, as it explores the astonishment and joy of finding yourself through connection with another.

Set in an isolated caravan park in Cornwall, MAKE UP is an immersive debut feature from Claire Oakley that defies genre and ramps up the atmosphere to draw you into the startlingly sensual sexual awakening of its protagonist Ruth.

I CARRY YOU WITH ME is an epic love story uniquely weaving fiction and documentary to tell a tale of two Mexican men and the love that colours their lives. The winner of the NEXT Audience and NEXT Innovator Awards at Sundance 2020, this Australian premiere has been brought to life beautifully by award winning director Heidi Ewing.

Two other Australian premieres see a gay African American teenager forced to relive May 28th, 2020 over and over again in THE OBITUARY OF TUNDE JOHNSON, a timely and urgent film about racism, homophobia and police brutatlity in the USA; and a documentary on American Jazz musician Billy Tipton whose story is reclaimed and performed by trans artists as they collectively paint a portrait of an unlikely hero in the beautiful and groundbreaking NO ORDINARY MAN.

In addition, the Festival will screen some of his classic films on-demand including: TIME OFF, his little-seen debut set in 1982 which was the first Israeli film to seriously address homosexuality in the military; YOSSI & JAGGER, the award-winning romantic drama of two male soldiers secretly in love that established his reputation worldwide; and THE BUBBLE which was first screened at the Festival in 2008.

YOU’LL BE TALKING ABOUT:
THE DILEMMA OF DESIRE – this powerful documentary uses Sophia Wallace’s ground-breaking ‘The Cliteracy Project’ to explore what reclaiming female sexuality means to a variety of women from a diverse range of backgrounds. This sex-positive documentary is sure to spark conversation!

BRING DOWN THE WALLS – Comparable in its uniqueness to PARIS IS BURNING and WHEN THE BEAT DROPS, this is an enjoyable, insightful, and complex analysis of the intersection of ethnic, societal, and pop cultures in the United States exploring of the legacy of Black, Latinx and queer culture on 1980s house music and its connection to the US prison industrial complex.

LA LEYENDA NEGRA – Aleteia is a teenager from El Salvador, whose scholarship in a US high school is at risk with the introduction of Trump’s forced deportation orders. A big hit at Sundance, this is a careful and authentic film using beautiful black and white cinematography to show the turbulent forces that shape the lives of queer immigrant youth.

DAYS (RIZI) – Celebrated auteur of Taiwanese Second Wave cinema, Tsai Ming-liang is back with a captivating piece of observational cinema. A methodical and meditative, unsubtitled witnessing of two gay men in Bangkok.

SAINT-NARCISSE – The 22 year-old Dominic has a fetish… for himself. When his grandmother dies he discovers a deep family secret: he has an identical twin named Daniel. The iconic Bruce LaBruce embraces humour and the taboo in this fresh take on the myth of Narcissus.

SEXY STUFF:
DRY WIND – Against a backdrop of rural Brazil, explicit sexuality is beautifully depicted with stunning cinematography. When Sandro meets new colleague Maicon, he is thrown into a spiral of sexually depraved fantasies as he contemplates what he is willing to do to get what he wants.

AMMONITE – the most talked about lesbian film of 2020, Mary (Kate Winslet) and Charlotte (Saoirse Ronan) share a passionate love affair that will defy all social bounds in the stunning Ammonite. On the southern English coast, the two women ’s initial dislike of one another develops in unexpected ways.

THE PRINCE – The recipient of the 2019 Venice Film Festival Queer Lion, this film introduces us to Jaime, a troubled young man grappling with his sexuality, who finds himself in a violent, sexually charged world of a Chilean prison in the 1970s.

PS BURN THIS LETTER PLEASE – The discovery of a collection of letters inspired the filmmakers to track down some of the authors and reminisce about their lives as drag queens in New York in the 1950s.

MARCH FOR DIGNITY – A captivating documentary following a group of LGBTIQ+ activists in Tbilisi, Georgia as they organise their nation’s first pride march.

EPISODICS & SHORTS:
The Festival will feature two episodic programs about young queer people finding their way in a modern world, the comedic THESE THEMS from the USA and hip Dutch series ANNE+.

ONLINE EVENTS:
The Festival will include many filmmaker Q&As on social media and will live stream a free panel on ‘Inclusive and Authentic Casting’ on Facebook and YouTube. Hosted by Monique Schafter, Editorial head of ABC Queer, panellists Lucky Price, a casting director and proud trans man and trans rights and visibility advocate, writer and comedian Alistair Baldwin, and writer, director, and producer Bee Cruse, a Cabrogal woman will discuss what it takes to get this right.

In the wake of #MeToo and the industry’s continuing battle with widespread sexual misconduct, there is a growing need for intimacy coordinators to safely create intimate sex scenes for Film & TV productions. Intimacy Coordinator Leah Pellinkhof will host a Zoom online workshop, demonstration and Q&A for filmmakers and actors on ‘Intimacy Coordinating: Safe Sex in Film’.

Queer Screen Co-Chair Cheryl Kavanagh says supporting Australian LGBTIQ+ filmmakers is a key priority for the organisation. “We’re not just focused on sharing stories with our community but also helping filmmakers produce those stories through financial support,” she said.

“We know the Queer Screen completion fund is an important asset for local filmmakers and we will continue to help create stories that reflect our community,” said Kavanagh.

Running from 18 February to 4 March in Sydney, and nationally on-demand, the Festival will screen with restricted and socially distanced viewings at Event Cinemas (George Street), Ritz Cinemas (Randwick) and the Hayden Orpheum (Cremorne), Event Cinemas (Hurstville) and the Moonlight Cinema (Centennial Park), before touring to Canberra and the Blue Mountains in late March.

Tickets are on sale now. For more information, and full program, visit: www.queerscreen.org.au for details.