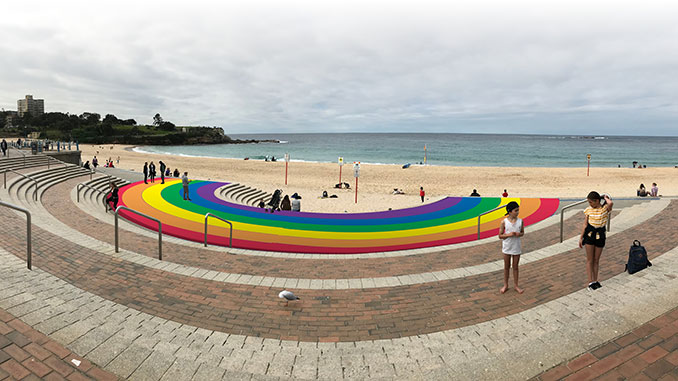 A 50-metre long rainbow walkway is planned to be installed on the Coogee Beach promenade as part of a Randwick City Council proposal to celebrate diversity, inclusivity and equality.

The temporary walkway will be installed in February 2021 as part of Council’s partnership and support for the Sydney Gay & Lesbian Mardi Gras.

Randwick Councillors unanimously supported the initiative at their Council Meeting in December 2020. Randwick Mayor Danny Said explained the rainbow walkway would be a strong statement of support for diversity and the local GLBT community.

“For many years, Council has raised the rainbow flag at Randwick Town Hall as part of our ongoing support for the Sydney Gay and Lesbian Mardi Gras,” explains Mayor Said. “This proposal enhances that tradition and makes a strong public statement of support for our wonderfully diverse local community.”

“The rainbow walkway will follow the existing shape of the lower promenade at the bottom of the Coogee Beach steps forming a natural rainbow shape.”

Installation will occur in February 2021 and is planned to stay in place for a number of months.