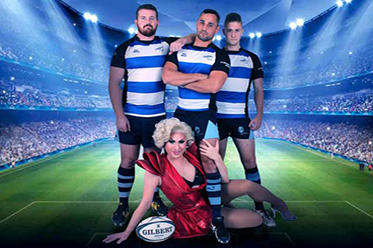 Disco Bingay is packing down for the month of May as the popular ACON fundraiser teams up with the Sydney Convicts Rugby Club to present Rugger Bugger Bingay.

Every week for four weeks, guests will have a chance to win an all access gold pass to the Bingham Cup – the world cup of gay rugby – plus a range of other fabulous prizes. The Bingham Cup is being played in Sydney in August and Rugger Bugger Bingay is a fundraiser for the Convicts as the club prepares to take on over 1000 players from 13 countries. Proceeds will be split 50/50 between ACON and the Convicts.

In addition to the fabulous prizes, there’ll be sport-themed décor and cocktails, plus several hot Convicts will be on hand every week to help guests tackle the ins and outs of the game. Not to be outdone, hostess Charisma Belle and barrel babe Naomi Palmer will be taking one for the team in a range of dazzling sporting outfits.

“LGBTI sporting organisations make a vital contribution to the life and culture of our community and ACON is thrilled to be able to team up with the Convicts to help raise money for their Bingham Cup campaign,” says ACON CEO, Nicolas Parkhill.

“The Convicts are a great community partner of ACON’s and we’re delighted that we can help them prepare for this major international LGBTI sporting event.”

Rugger Bugger Bingay will take place every Thursday during May, upstairs at The Midnight Shift Hotel, 7.00pm for a 7.30pm start. Cost is $20.00 for all games.