The State Library is looking for people who came out in the 1970s! Lifelong activist John Englart excitedly scribbled this note in his diary 47 years ago: ‘Monday 10th September 1973: This is GAY PRIDE WEEK, I have come out !!!’

John Englart, then a 17-year-old schoolboy from Sydney’s north-west, was among the many young people realising their same sex attraction in an astoundingly different Australia to the one we know today. Back then, male homosexuality was illegal, and men could get hit with a 14-year gaol term for being caught in the act, twice the penalty for rape.

The State Library has just acquired John Englart’s personal diaries kept between 15 March 1970 and 2 September 1974 (from the age of 17-21), as well as his rare collection of Kodak instamatic snapshots documenting Australia’s first national Gay Pride Week in 1973, which saw Sydney’s largest public gathering of lesbians and gay men yet, and other important protests of the era.

The acquisition is timely – it will feature in the Library’s new exhibition Coming Out in the 70s to mark the 50th anniversary of the founding of CAMP Inc (the Campaign Against Moral Persecution), Australia’s first political organisation for same-sex oriented men and women.

CAMP’s main aims were to promote the visibility of gay men and lesbians in the community, advocating for their rights, and to raise public awareness about the issues faced by homosexual people in Australia at the time.

According to Coming Out in the 70s co-curator Bruce Carter, “Englart’s compelling firsthand account offers not only a rare insight into the personal and emotional journey of a Sydney teenager exploring his sexual identity, but also records the growing political awareness of this young man who would become a lifelong activist.”

Coming Out in the 70s tells the stories of the lesbians and gay men who, through individual acts of defiance and mass political campaigning, proudly demanded to be seen, heard and accepted.

Penny Short was trainee teacher at Macquarie University when she was declared ‘medically unfit’ to teach children after her explicit lesbian poem was published in the student paper Arena. Her Department of Education scholarship was revoked and never reinstated. 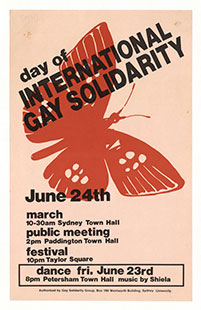 “This poster – part of a collection of over 100 stunning posters recently donated by Mardi Gras 78er and activist Robert French – is like the holy grail of Sydney gay rights poster art as only a few copies have survived,” said Exhibition co-curator Margot Riley.

“It features a butterfly which was a symbol of same sex orientation long before the rainbow flag was officially launched in San Francisco in 1978.”

The State Library is acknowledged to be one of the first cultural institutions in Australia to actively collect the records of lesbians and gay men, spearheaded by then Mitchell Librarian Margy Burn in the mid-1990s, and it hasn’t stopped.

However, there are still gaps in the collection and State Librarian John Vallance is calling on the public to donate items related to past and present-day experiences of coming out, LGBTIQ+ activism, participation in gay and lesbian movements and community life.

“We’re looking for material (posters, photographs, letters, diaries, magazines, memorabilia, etc) from baby boomers and beyond so that all these stories can come out of the closets, and out from under the bed, to be told, shared and preserved for future generations,” said Ms Riley.

“It is vital that the Library’s collection represent all aspects of sexual diversity in NSW, recording the voices of trans and Indigenous people as well as those of people from non-English speaking backgrounds.”

Coming Out in the 70s
State Library of NSW, Corner Macquarie Street and Shakespeare Place, Sydney
Exhibiton continues to 16 May 2021
Free entry