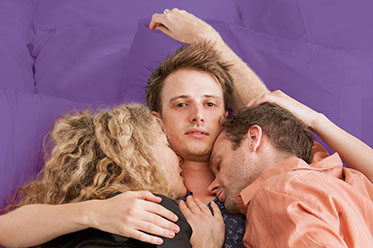 One of Britain’s hottest young playwrights, Mike Bartlett, explores sexuality and the agony of confusion in the Australian premiere of Cock. This funny, intimate and provocative play directed by MTC Associate Director Leticia Caceres with original music by Missy Higgins will be presented for a limited season at the Fairfax Studio, Arts Centre Melbourne.

“Beyond the cheeky title, Cock is an artful and sophisticated interrogation of desire,” says director Leticia Caceres.

“Cock strips away the roles assigned to us by society and asks us to confront our primal needs in what feels like a battle to the death. Cock is fresh, sexy and heartbreaking. A real theatrical aphrodisiac for Melbourne audiences.”

John shares his life and home with his male partner, but when the couple decide to take a break John unexpectedly meets the woman of his dreams. Trapped in a love triangle and riddled with guilt, John is stuck in a personal crisis not knowing what to do, what to say or who he really is. He’s paralysed by indecision.

As the pressure increases, it becomes clear there’s only one way to straighten things out. Cock is a remarkable portrayal of a man questioning his identity that sensitively explores the multi-layered complexity of sexuality.

Mike Bartlett has gained a reputation as one of Britain’s most exciting young playwrights. His play Love Love Love won Best New Play at the 2011 UK Theatre Awards and Cock won a 2010 Olivier Award for Outstanding Achievement in an Affiliate Theatre.

His other plays include Bull, Medea, Chariots of Fire, 13, Decade, Earthquakes in London and Contractions. Bartlett won the Writer’s Guild Tinniswood and Richard Imison Awards for Not Talking, and the Old Vic New Voices Award for Artefacts.

His television series The Town was nominated for a BAFTA for Breakthrough Talent. Currently Associate Playwright at Paines Plough, Bartlett was Writer-In-Residence at the National Theatre in 2011 and the Pearson Playwright in Residence at The Royal Court Theatre in 2007.

Impressing critics on both sides of the Atlantic, the play received four star reviews from the Financial Times, Sunday Times, Evening Standard and Time Out New York.