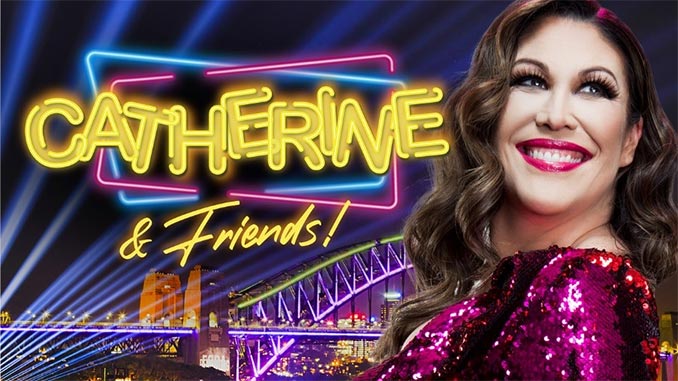 Joining Catherine on Friday 30 July is singer/actor Ursula Yovich, writer/actor/composer/pianist Phil Scott and comedy legend Jean Kittson. Also making her virtual return to Catherine & Friends is pivoter of the year Verushka Darling who will be standing by to take your texts as she sashays from ‘hotspot’ to ‘hotline’.

Catherine & Friends debuted online on Friday 16 July to thunderous reviews. Described by the Sydney Morning Herald as “riotously entertaining” it captured hundreds of global audiences including Los Angeles, Florida and Colorado, Spain and Berlin. Australia tuned in too!

Catherine & Friends is presented as part of the 2021 Melbourne Digital Concert Hall (MDCH) series. Born in the middle of Australia’s Covid pandemic in 2020 and at a time when the Australian Arts and entertainment completely shut down, the MDCH presented over 233 digital concerts raising over $1.4 million in support of Australian musicians and the arts sector.

Now, as NSW finds itself in what is predicted to be a long lockdown period, MDCH brings their digital live-streaming platform to Sydney. 100% of ticket sales goes directly to the artists, supporting them in their greatest time of need.

“To be off the couch, performing and working is the greatest outcome we could have hoped for,” said Catherine Alcorn. “The support was overwhelming and it would be a tragedy to stop now, so we’re not going to!

Catherine Alcorn is a multi award-winning artist, producer, Artistic Director and one of Australia’s most in-demand entertainers. She wowed the world with her award winning show The Divine Miss Bette and is no stranger to live-streaming having conceived and delivered The Reservoir Room during Australia’s first lockdown of 2020 keeping over 45 of Sydney’s Arts and Entertainment industry employed.

Ursula Yovich is an artist and writer of works including Magpie Blues, The Man with the Iron Neck and Barbara and the Camp Dogs – which premiered at Sydney’s Belvoir Street Theatre in 2017 with Ursula in the starring role winner her the Helpmann Award for Best Female Actor in a Musical and Best Original Score.

Well known for her comedy debates for the ABC, Channel 9 and Channel Ten, Kittson has been a regular columnist with New Weekly, Sunday Telegraph, the Sydney Morning Herald – Sydney Magazine, Inspire Magazine, the Readers Digest Health Smart magazine and The Hoopla.

Catherine & Friends will be globally live-streamed from The Concourse Theatre, Chatswood on Friday 30 July. For more information, visit: www.melbournedigitalconcerthall.com for details.