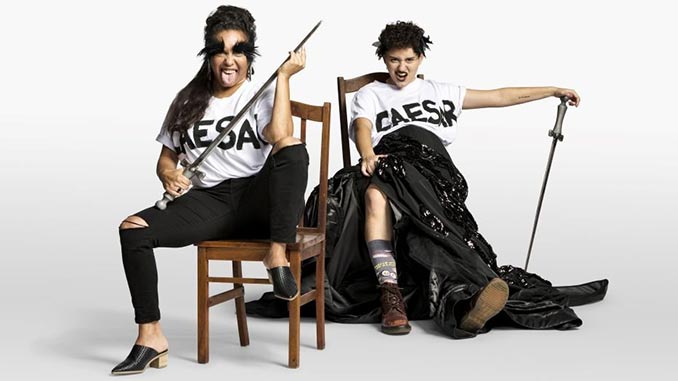 This hilarious adaptation follows a self-absorbed politician and the men conspiring against him with a gender-diverse cast of Queensland actors, including Chenoa Deemal, Billy Fogarty, Bryan Probets, Will Carseldine and Giema Contini.

“La Boite exists to push the boundaries of theatre and its form by collaborating with extraordinary people who enrich and diversify the narratives, practices and voices on Australia’s main stages, and this cutting-edge iteration of CAESAR is exactly that,” said Ms Spatz.

Director Sanja Simic said this unique adaption is the first of its kind to have five writers collaborate on a new iteration of Shakespeare’s tragedy.

“This is the first mainstage production in La Boite’s history to enlist five playwrights to respond to a classic text, and while there might be a singular directorial vision, the work itself will be a tapestry of voices, which we hope will deliver a rich, sharp and playful text,” said Ms Simic.

“I want audiences to be entertained and challenged in equal measure – walking out of the theatre and having an active conversation about what they’ve seen, regardless of whether they loved or hated it, is step one.”

“It’s incredibly special to bring this masculine narrative to life through the voices of female and non-binary playwrights, who are not often represented across professional stages,” said Ms Contini.

“This is going to be a powerful work with many twists and turns for audiences, and I’m humbled to be part of such a brilliant group of artists.”

In the first mainstage show of their professional career, Artist Company actor and cast member Billy Fogarty is thrilled to join CAESAR. “I’m so fortunate and privileged to be joining La Boite’s creative team so early in my career,” they said.

“I want to tell stories that matter, and I think audiences will be surprised about the passion, intelligence and humour that comes from this fresh take.”