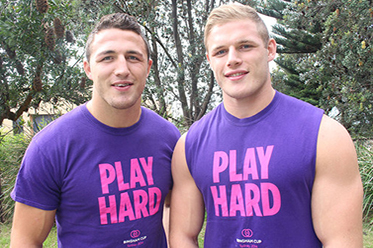 As Sydney prepares to host the world cup of gay and inclusive rugby, Rabbitohs stars Sam and Tom Burgess have called for an end to homophobia in sport and are encouraging people to take part in a survey looking at the issue.

Sam Burgess says “I don’t see why there should be any discrimination about colour, sexuality, your heritage or where you’re from.”

“Sport is a great thing, and it brings people from all different aspects of life together, so why should your sexuality be a problem? The only way we are going to understand the issue is if people get out there and tell their story so we can help fix it.”

Thomas Burgess agreed and said, “We have a lot of gay friends and think that discrimination in sport is old fashioned and there is no place for it. In this day and age, we shouldn’t be discriminating against anyone, for anything.”

The Burgess brothers said they were surprised there were not more openly gay players in professional sports and said the online study on homophobia in sports will help everyone understand why players don’t feel safe in coming out of the closet.

The two brothers recorded a video disparaging discrimination and explaining why they feel so passionate about the issue. You can watch the video here:

The First International Study on Homophobia in Sports, Bingham Cup Sydney 2014 is working with a number of university researchers around the world to conduct a the study into the lesbian, gay, bi-sexual community’s experiences, primarily in organised / competitive team sport.

The study looks at whether people choose not to play team sports because of fear of discrimination as well as the prevalence of homophobia, such as slurs, among athletes and fans.

Participation in the study will take less than ten minutes and will greatly assist in helping the wider community  understand issues affecting the LGB community.

For more information and to take part in the study, visit: www.outonthefields.com for details.