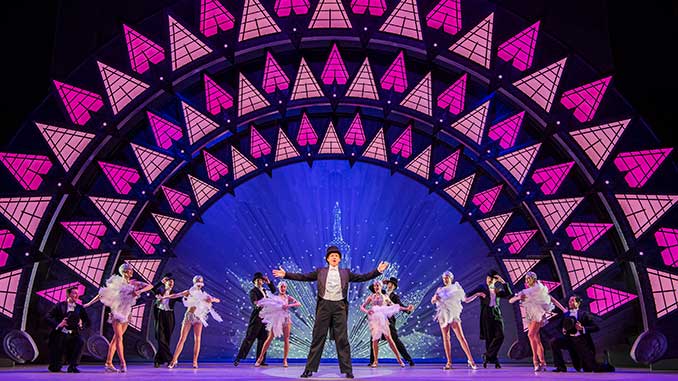 Queensland Performing Arts Centre (QPAC), The Australian Ballet and GWB Entertainment have announced Broadway sensation An American in Paris will have its Australian premiere in Brisbane at QPAC’s Lyric Theatre from 8 to 30 January 2022.

Hailed as a tour de force for its inventive choreography, the four-time Tony Award®-winning Broadway musical tells the entrancing story of a young American soldier and a beautiful French girl, set against the iconic backdrop of the most romantic city in the world.

Inspired by the Academy Award®-winning MGM film, acclaimed director and choreographer Christopher Wheeldon brings the enchantment and magic of Paris alive on stage with popular songs by George and Ira Gershwin, including I Got Rhythm, ’S Wonderful, But Not For Me and They Can’t Take That Away From Me.

A rhapsodic combination of classic score, timeless love story, exuberant dance and sumptuous design, the production has captivated audiences and critics alike, with The Wall Street Journal declaring it “a masterpiece!”.

QPAC Chief Executive John Kotzas said Queensland audiences would be the first in Australia to experience the show that was an impeccable blend of musical theatre and ballet.

“The Gershwin brothers’ music provides a wonderful foundation from which to explore and evoke all the elegance, madness and energy of post-war Paris,” he said.

“Christopher Wheeldon and Craig Lucas have taken the vitality and beauty of a screen classic and recrafted it for a new century. I have no doubt audiences will love it and I look forward to welcoming our friends from The Australian Ballet back to QPAC,” said Mr Kotzas.

“We’re thrilled to be bringing the Tony Award®-winning production by Christopher Wheeldon to Australia with our partners GWB Entertainment. Given the inclusion of classical ballet in the production, The Australian Ballet sees this collaboration as a natural fit for the company in this unique co-producing capacity,” said The Australian Ballet Artistic Director David Hallberg.

“We’re excited for An American in Paris to tour across Australia, having its premiere at QPAC in January. With this world class creative team and The Australian Ballet having worked with Christopher Wheeldon extensively, we know Australian audiences will love this musical,” said Mr Hallberg.

“We fell in love with An American in Paris after seeing the production in Paris at Théâtre du Châtelet and immediately set our sights on bringing the musical to Australian audiences,” said GWB Entertainment’s Richelle Brookman.

“We are thrilled to be collaborating with David Hallberg and The Australian Ballet and are excited for audiences to experience Director-Choreographer Christopher Wheeldon’s extensive ballet scenes performed by classical ballet dancers at the peak of their artistic craft, woven into a blockbuster Broadway musical that celebrates love, beauty, art, and the timeless music of Gershwin,” said Ms Brookman.

With a book by Pulitzer Prize finalist Craig Lucas, and Tony Award®-winner Bob Crowley’s swoon-worthy set and costume design that draws inspiration from some of France’s most famous artists, An American in Paris opened to widespread critical acclaim at the Palace Theatre on Broadway in April 2015 after its world premiere at the Théâtre du Châtelet in Paris. It has since gone on to tour London’s West End, Tokyo and Beijing.

The musical was also included on the ‘Year’s Best’ lists of The New York Times, The Wall Street Journal, Entertainment Weekly, The New Yorker, the Associated Press and The Hollywood Reporter.

“Gorgeous, just plain gorgeous! Just about everything in this happily dance-drunk show moves with a spring in its step. Pure joy!” – The New York Times

The national tour of An American in Paris is supported by the Restart Investment to Sustain and Expand (RISE) Fund – an Australian Government initiative.

The Australian premiere season of An American in Paris will run at QPAC’s Lyric Theatre from 8 to 30 January, at Her Majesty’s Theatre, Adelaide from February, Crown Theatre, Perth from February, State Theatre, Arts Centre Melbourne from March, and Theatre Royal Sydney from April. Tickets for the QPAC season are on sale Wednesday 20 October 2021. For more information, visit: www.qpac.com.au or www.americaninparis.com.au for details.

Image: Haydn Oakley (Henri Baurel) and Company in An American In Paris by George and Ira Gershwin @ Dominion Theatre – photo by Tristram Kenton