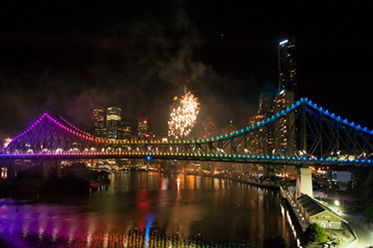 Brisbane’s Story Bridge will be lit in rainbow colours on 17 May to recognise the International Day Against Homophobia and Transphobia (IDAHOT), the Brisbane City Council has announced.

“The introduction of LED lights on the Story Bridge has made it possible to mark significant events and council looks forward to continuing its strong support of the LGBTIQ community by raising awareness about this important date,” said Cr David McLachlan.

“The Story Bridge is one of our iconic landmarks, attracting thousands of cars each day and many more individuals observing its lights at night. Lighting the Story Bridge for the IDAHOT will raise awareness and work toward putting an end to discrimination in our community.”

As part of IDAHOT, the Brisbane Lesbian and Gay Pride Choir will perform under the bridge at the Queensland Multicultural Centre.

The concert titled My Country will feature an evening of Australian and Irish music – from Indigenous songs to folk ballads, from show tunes to pop hits. For more information, visit: www.blgpc.org.au for details.