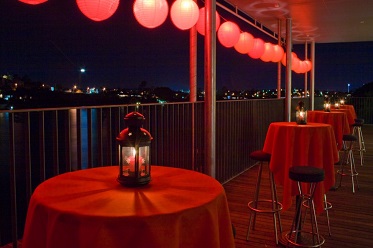 The launch cocktail party is a first for the festival, and during the launch party the full Brisbane Queer Film Festival line-up will be revealed.

According to producer Troy Armstrong the event will outline the films for 2014, a series of new events and the festival campaign featuring well-known local identities from Brisbane’s LGBTIQ community.

“2014’s Brisbane Queer Film Festival will include retrospective screenings, a slumber party screening and special events involving the LGBTIQ community so we thought a cocktail party to show off our rooftop at Brisbane Powerhouse was a great way to celebrate the changes,” says Mr Armstrong.

“The theme is 1950s Italian romance so pop on your best summer party frock and embrace La Dolce Vita for a night of cocktails, river views and smooth sounds on our deck.”

The 15th annual Brisbane Queer Film Festival is on 28 March – 5 April 2014 and will feature films celebrating LGBTIQ romance from around the world.

In 2014 new events include the launch cocktail party and closing night party (in addition to the traditional opening night party scheduled for 28 March), business networking functions, retrospective screenings and film forums. The winners of the Queer Aussie Shorts national filmmaking competition will also be revealed on the evening.