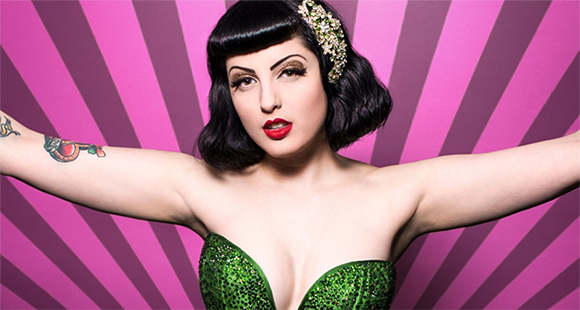 This year’s Wonderland features more outdoor activities to help everyone celebrate the Brisbane summer, and enjoy the Brisbane Powerhouse precinct according to Artistic Director Kris Stewart.

“Wonderland is our summer festival under the stars and we invite everyone in Brisbane to come out with their friends and family to soak up the carnival vibes, catch a show or two and taste some of the delightful treats on offer,” says Stewart.

Fresh from a smash-hit South American tour, Finucane and Smith’s Glory Box: La Revolución is a show like no other. Frolic with internationally-acclaimed Moira Finucane and her darkly-glamorous coterie of beyond-burlesque beauties, circus sirens, smokin’ songbirds and daring dancers.

Fresh from rave-reviews in New York, witness the tale of an infamous French courtesan who proves that well-behaved women rarely make history. Songs for the Fallen is a wild and hilarious new Australian musical, charting the extraordinary life of Marie Duplessis. Courtesan, party girl, liar and legend, follow her journey from extreme poverty to the most notorious woman in France.

Audience favourite Leah Shelton is back with a hot mess of jewel-encrusted gore, lip-synch, pole-dance and black comedy in PULPSHOW. Take a trip through a sunburnt country where cars rule, hitchhiking kills and dingoes eat babies. Inspired by pulp mags, film noir, Oz-ploitation films, Kings Cross, Wolf Creek and Quentin Tarantino, there is something for every pop-culture and sub-culture aficionado.

Joyous. Sexy. Heartbreaking. Take a dizzying ride through love’s collision course in I Want To Know What Love Is. Directed by local theatre-maker Dan Evans, the sold-out surprise hit of the 2014 Brisbane Festival pash-smashes its way into Wonderland ready to raise your pulse and pluck your heartstrings one more time.

Portrait of a Young Man – revel in past loves with this paint-splattered and incisive homage to romantic nostalgia, as performer Nicholas Prior takes the stage to represent all of our lovers and recall the joy, lust and fear they inspired.

The glitter-fuelled love children of David Bowie and Barbarella are here to party with you. The Retrofuturists are three lost time travellers from the future – a live band with a darkly eccentric sound and ominously electrifying vocal harmonies. Join them for their unique science fiction cabaret as they dive headfirst into the contemporary queer and political zeitgeist, armed with outrageous antics and a razor-tongued wit.

Step inside the Bamboozled Tents and enter an effervescent world where anything goes, thrills come easy and you’ll laugh up a storm. Each week the tents will offer a variety of shows in repertoire featuring circus, vaudeville, mime, comedy and even a flea circus.

Don’t miss your chance to grab a tasty treat before you settle into a show, or after an exhilarating performance at the Wonderland Food Markets. Held Thursday to Sunday each weekend of Wonderland, local markets legend Jan Power brings us her favourite providores all bearing their sizzling goodies, just-baked treats and freshly squeezed wares for you to enjoy. Bar Alto brings the beverages outside with their pop-up bar so you can enjoy a chilled wine or beer as the sun goes down.

The 2015 Wonderland Festival at the Brisbane Powerhouse continues until Sunday 20 December. For more information, visit: www.brisbanepowerhouse.org for details.